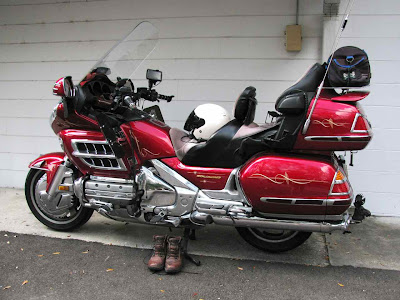 Today the day dawned clear and bright, which seems to be what will be happening for the foreseeable future while I am here in Florida. It was the day for Pete's celebration. Pictured above is Pete's, Norma Jean's and Moose's "ride," their Gold Wing motorcycle that allowed them to cover more than 70,000 miles together in less than three years. Pete's boots are in front, his helmet in the seat. At the top on the back, Moose's carrier is strapped on top of their luggage rack. At the very back, you can see they have a moose trailer hitch cover. The motorcycle was parked by the entrance to the clubhouse. 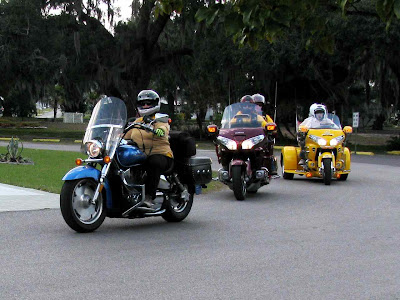 Seventeen Gold Wing motorcycles rode in formation up to the clubhouse with around thirty riders from their Gold Wing Chapter, and another forty people from various parts of Pete's life showed up to join us for the celebration. As soon as the bikes were parked, however, the riders lined up to give Norma Jean a hug and a "Riesen to live." Each one handed her a Riesen candy, which was put with the others into a bag. 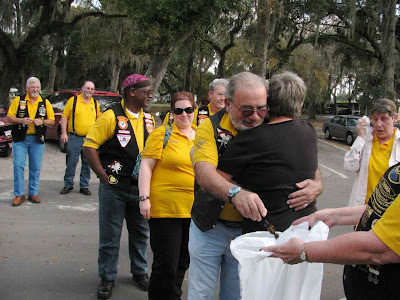 After being received by Norma Jean, the chapter members came inside to join the others to watch rotating pictures of Pete's life, along with an amazing display of many of his artistic works. Peter had compiled pictures of Pete that we were given from different people into a lovely slideshow, and dozens of Pete's most impressive works of art were displayed on the tables. People talked, visited, and ate some of the snacks that Allison had provided until the celebration was scheduled to end, at 3:00 pm. 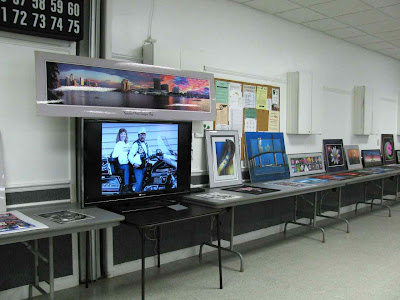 After we packed up all the things we had brought and headed back home, Lauren and Jim, old family friends, came back to the house to look at Pete's box of mementos that had been salvaged by Allison and Norma Jean, things he felt were still too good to throw out. This old scale is decades old and was once covered with fake fur, and those two cups of his had been used for so long that Lauren (the pretty lady in blue) refused to allow them into her house. 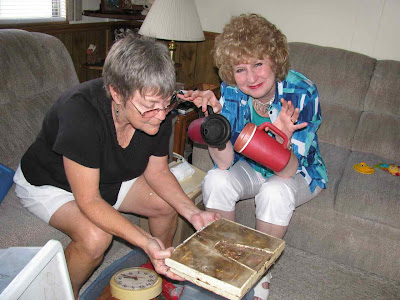 Now it's 7:00 pm and I'm getting ready to post this, while Norma Jean is asleep in Pete's recliner (snoring vigorously), Peter is working away sitting in his desk chair, and Allison is cleaning up in the kitchen. Little Lexie is already asleep. Now that the celebration is behind us, I will be heading to the Drop Zone tomorrow to check out Skydive City. I'm pretty tired, too, but I'll try to stay awake for another hour or two. It was a good day, a good celebration, and after a day or two I think the closure will begin to sink in. We love you, Pete!
:-)
Posted by DJan at 4:12 PM