I just got back from seeing the movie Hitchcock with my friend Judy. It was released in 2012, and I saw that Helen Mirren garnered an Academy Award Best Supporting Actress nomination for her portrayal of Alma, Hitchcock's wife. The movie doesn't seem to be very popular, given that it's only been on for a week and there was hardly anybody in the theater. The reviews are mixed, partly because it's not historically accurate, I guess. I checked on line and found this NPR link, Fact Checking 'Hitchcock': The Movie and the Myth. The movie was a dramatization of the trials and tribulations that Hitchcock faced in trying to make the movie "Psycho" in 1959. The movie was a real departure for him, but it became a classic.

I wonder what people will think of this movie who know little to nothing about the man himself, as many of the mannerisms and looks that Hopkins does so well are ones I remember from seeing Alfred Hitchcock on TV over the years. He was a familiar figure to me. He loved to make fun of himself and had a great sense of humor. That NPR link has a line that I completely agree with:


To some extent, Hitchcock — you know, the film that we're talking about — is something that he would delight in even if he might be horrified at aspects of it, because it is partly the consequence of this long process that he started in the 1920s of building himself into a public personality that we could take delight in.

He would start and end a program with a cameo, which are also present in this movie. I left the theater happy that I had seen it and can recommend it as a really good movie, but not a great one. Mirren was also good but I don't think her performance will win. 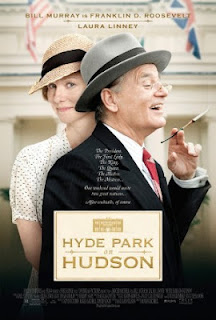 The other movie that we saw last week is Hyde Park on Hudson, a movie about Franklin Delano Roosevelt and his spinster cousin Daisy with whom he has a long affair. (Ed: I fixed this where I had called Daily his aunt instead of his cousin. Sorry!) You might be as surprised as I was to find that Bill Murray played FDR. Laura Linney played Daisy. The movie covers an actual event that happened at Hyde Park in 1939, when FDR and First Lady Eleanor invited the King and Queen of England to their home in upstate New York right before World War II broke out.

The movie is billed as a "comedy-drama," and it certainly lives up to both aspects. I found myself quite amazed at Murray's ability to portray someone very different from himself in looks and temperament. (Or as I imagine Bill Murray is, anyway.) I enjoyed the movie, not as much as Hitchcock, but it was passably good. It certainly helped that I read the reviews before I saw it and they were almost uniformly bad. My expectations were suitably lowered, so I was pleasantly surprised. It was fun; you can't expect much more than that from a movie, can you?

The gist of these two movies is that historically, they are nowhere near accurate, but they were well imagined and enjoyable. If you go to either one, I'd love to know what you think!
:-)
Posted by DJan at 4:12 PM