Got your flu shot yet? 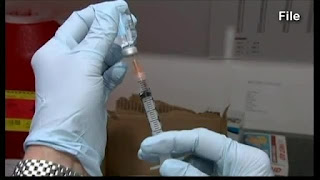 I got my flu shot back in October, I think. It might have been in early November, I'm just not sure. But I am very glad I got it! The epidemic is increasing all over the country. I went to the doctor's office today, in spite of the fact that I have caught a cold and hope I didn't spread it to anybody today. Even went so far as to wipe down the pen I used to fill in the paperwork. The doctor assured me that the flu shot should protect many of us in the area, and the strain he's seeing is covered by the vaccine.

It was nice to see my doctor for my annual physical and to be given a pat on the back for how well I seem to be doing. My cholesterol numbers are the best they have been in the four years I've been coming here, and all my other numbers made my doctor quite pleased. Walking out of the clinic, I was gratified to see the sunshine and glad I was able to head home, not wanting to expose anybody else to this cold.

It's only a cold, I'm sure, since all I've got in a stuffy head and a scratchy throat. My temperature was normal, and my weight was even cause for celebration! Two years ago when I went to see Dr. Whitehead for the first time, I realized I had gained ten pounds during the previous year, and now I am not only where I want to be, but maybe I can actually start eating a little bit more every day. It's interesting that I don't seem to have all that much difficulty losing weight once I get on the bandwagon, but you can't stay in a losing mode all the time. Two years ago I started using an app to help me keep track of what I was eating, and during the recent holidays my sister Norma Jean introduced me to HER app, and now I am using it every day. It's called "Lose It" at the app store, and it's even better than my previous one. My iPhone allows me to scan the barcode and it goes into my food diary. Is that cool or what?

Maintenance is my goal during the coming year. If I can enter December 2013 weighing the same as I do right now, I will be thrilled. But it's been a battle: when I stop counting calories and just eat, I begin to gain weight. When I'm tracking every bite, I think about what I'm doing when I put food in my mouth, and it's not as big of a deal to keep under a certain caloric number every day.

Smart Guy and I drove to Snohomish last Sunday, not to make a skydive or anything, but to pick up my repacked parachute harness and container system, which had been languishing at the Drop Zone for months, since there was little to no chance of making a jump. Sunday was sunny and beautiful, the roads were great, but when we got to Harvey Field, the frost had only recently retreated, and all the trees were covered with frost! That did not deter the youngest among us from going up into those blue skies, but I wasn't interested, not at all.
The white on the ground is from the frosty fog that had not yet been burned off from the sun, which had only recently made its appearance. After I paid my bill and made a hasty exit, I'm sure that many more skydives were made that day. I didn't realize at the time I was coming down with a cold, but it didn't matter: I was not tempted.

Today I am sitting in my chair writing this post, while paroxysms of sneezes capture me and I give thanks that I am in a warm, dry place with a partner who is busy making my dinner for me while I write this post. Not to mention that I got a "well done" from my doctor! Life is good.
:-)
Posted by DJan at 5:00 PM