Al sent around an email last week asking if any of the Senior Trailblazers might be interested in a snowshoe outing before the weather changes. Three of us showed up early this morning and spent the day in the High Country on snowshoes! We left foggy and overcast Bellingham and headed up the Mt. Baker Highway to find sunshine and warmer temperatures. It felt almost balmy, until a breeze picked up and kept us wearing our coats all day.
On the way to the meeting place, I realized I had forgotten my camera, and there was no time to go back for it, so I decided to make do with my iPhone camera. Al brought his camera, so these pictures are a mixture of his and mine. I was very pleased with the quality of the pictures I was able to get from a cellphone, but it doesn't have a zoom and makes decisions for me that I would not make on purpose. Not perfect, but WAY better than no camera at all. 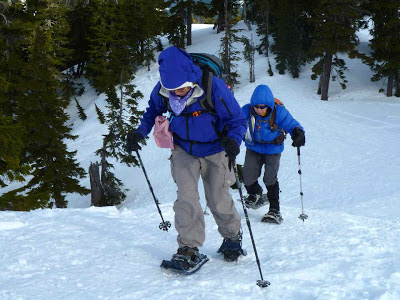 We headed up to Huntoon Point from the Heather Meadows parking lot. We really didn't need our snowshoes, since it has been at least a week since it snowed, and we were mostly hiking on what is affectionately known as "Cascade Concrete." The only time it was serene and quiet were the few moments we were in untracked snow.  A storm is due any time now, which is why we decided to go today. 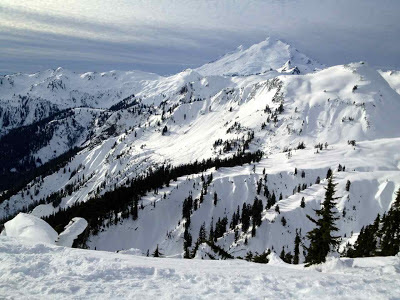 The sunshine left us as we saw a bank of clouds building, but we had magnificent views of our two favorite mountains. Here's Mt. Baker looking regal in the sun, a picture taken with my iPhone. As we continued our upward trudge to Huntoon Point, the snow became marginally better as we gained altitude. 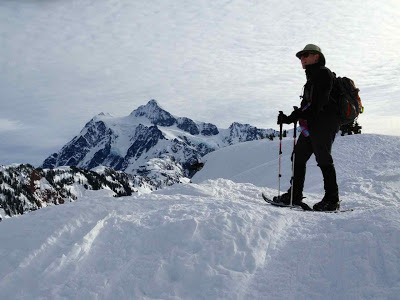 Also taken with my phone, this picture shows Mt. Shuksan with Al in front, as we reached the point. If I had my regular camera, the mountain would look much larger because I would have used my zoom. As it was, I had to crop the picture anyway because my thumb was over the top part of the picture. I'll need to get better at this if I keep forgetting my camera. We sat down to have lunch, and one of our favorite friends, the grey jay (also known as the camp robber) showed up. I fed him a few bits of my trail mix and put together this collage. Pictures are all taken by Al.
I have done this before, putting some nuts in my hand and letting the jay take them. The feeling of his little sharp claws on my hand is interesting. He wasn't going to let go or leave until he had crammed every last bit in his beak. I watched as he picked up one, two, three almonds, stopping for a moment to pose for the camera before taking off.

It was a wonderful day spent in the mountains a mere hour or so away from town. Thursday the rest of us will gather for a hike that is predicted (again) to be in rain.  But I don't really mind; I had today in sun, clouds and snow, and Friday I'll be in Florida!
:-)
Posted by DJan at 4:34 PM