Another day in Paradise 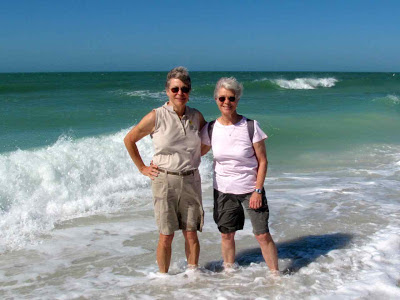 Yesterday, Norma Jean, her neighbor Doris, two dogs, and Yours Truly went off to St. Petersburg to frolic in the surf. Florida's west coast has many beautiful beaches, and we were originally headed off to Fort De Soto Park, which has a dog-friendly beach. We decided to stop first for a nice lunch, and found a place right on the beach and ended up going no further. We watched pelicans diving for fish, walked in the surf, and enjoyed the magnificent sunshine. There was quite a breeze, as a storm was due in by evening. Doris' dog Jingles was afraid of the wind, the water, and the unfamiliar surroundings, so she held him most of the time. He did get a bit better before too long. 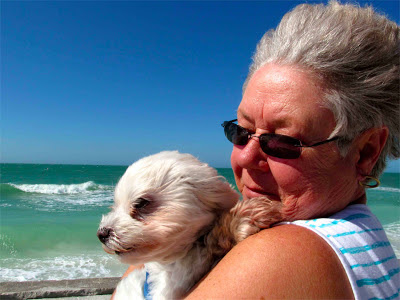 Can you tell it was windy? Jingles is a 12-year-old rescue dog that Doris has had for two years, since her husband died. Nobody knows what Jingles history was, but he growled, bit, and was generally disagreeable when he first came to live with her. Doris persevered, and now Jingles plays with Norma Jean's dog all the time and has learned to play with dog toys. It took more than a year before he was comfortable in his new environment.

Since the drive to St. Petersburg was more than an hour, and after we had finished lunch, we decided we had already had a fine time at the beach, so we decided to skip the park and drive back home. Norma Jean and I took a nice little walk around her community and spied these little ducks looking for lunch. We laughed as they paddled their feet to keep themselves in this position. 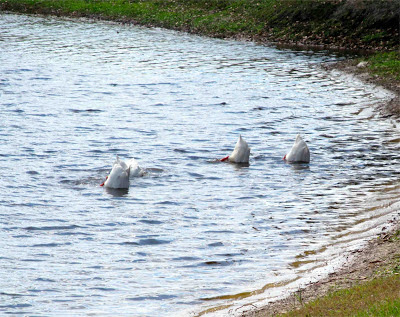 As I approached to get more pictures, the ducks decided that maybe they should take off before we got too close. The setting sun behind them caught the light and made this a favorite shot. Yes, indeed, another day in Paradise. I am so enjoying being with Norma Jean and sharing the life she lives these days. 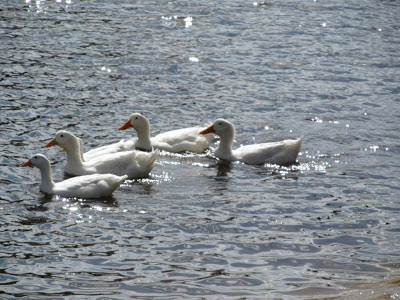 The projected storm came through during the night, with wind and rain and more than a twenty-degree drop in temperature. Yesterday was in the 80s, and today it's in the 50s. But the sun is still shining and I will miss seeing it like this. I still have another week, and I'm going to enjoy it!
:-)
Posted by DJan at 9:36 AM