Oh no, not again! I awoke this morning to the sound of the rain drumming on the roof. It was only a 30% chance of rain today, with sun breaks and drier weather predicted after a few "lingering showers" in the morning. This was NOT what I expected as I drove to the Senior Center in the gloom, windshield wipers removing wet sloppy rain that had some ice mixed in. Only six of us met today to do an around-town walk in the rain. Not pictured is Mike, and I'm behind the camera. 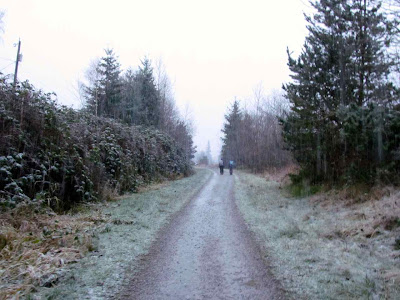 We know this walk very well, and it's pretty when the weather is fine. When I took this picture, the rain had begun to turn to snow and was beginning to stick on the foliage. There wasn't much to photograph today, so I figured that maybe I could give my readers a sense of our experience. Be sure you imagine plenty of moisture. We walked almost ten miles, covering lots of distance from the Barkley Village parking lot, our starting point. We had to cross a few streets to go from one park to another, and at one intersection I saw a perfect image for the day: Peggy's hat. 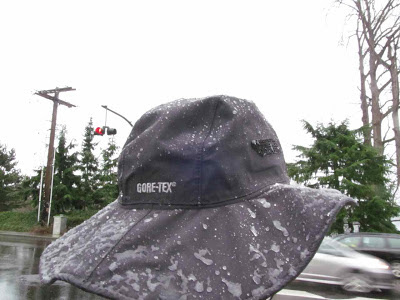 There's some ice mixed in with the water on her hat. This is known as a "Seattle Sombrero" for those who want to find the latest in rain gear. It not only does a good job, the longer brim in the back keeps the rain from running down inside your jacket. I tried this one on at REI but couldn't make up my mind. Presently I use the hood on my rain jacket with a billed cap. Here's a map of today's route, for those who might be interested. 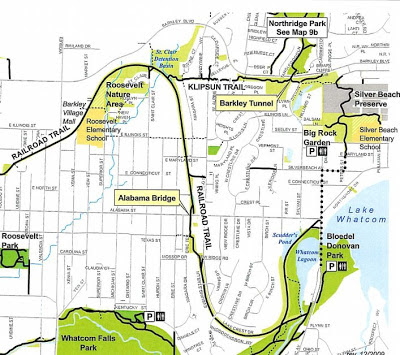 We started from the Barkley Village Mall at the middle left and went through the Roosevelt Nature Area, on Railroad Trail to Scudder's Pond before we had to walk on roads (the dotted lines). After a short excursion to look at Whatcom Falls, we went to Big Rock Garden and made our way to the Klipsun Trail before heading back to the parking lot at the mall. I took this picture of one of the sculptures in the Big Rock Garden.
By the time I took this picture, the rain had begun to ease up a little. It wasn't too awfully long before we noticed that the clouds had begun to thin overhead and a little bit of blue sky was beginning to peek through. Now, at 2:00pm, I can see actual SUNSHINE outside. After having been out in the cold and wet for several hours, though, nothing much is going to pry me from my comfy chair in the living room.

It's supposed to clear off and the temperatures drop to the teens tonight, our coldest temperatures of the season so far. It's only two more weeks before I leave for my sister's home in Florida, where I noticed today it reached 85 degrees F. I hope it won't be too much of a shock to my system!
:-)
Posted by DJan at 2:23 PM