New year is off to a good start


I almost forgot what it feels like to have a sky full of sun. It was quite cold last night and fog hung over everything as I drove to Lake Padden, but occasionally the fog would lift and I was blinded by the low sun shining right in my eyes. About fifteen of us met there to ring in the new year with a quick walk around the lake. 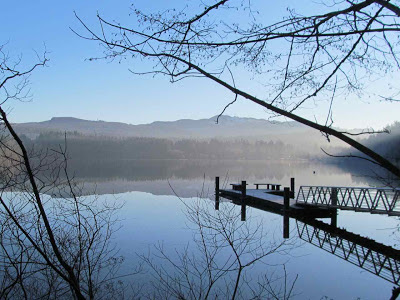 This was the first walk I ever made with this group, three years ago today. I wrote about it here, and  back then I stayed to take pictures of the Polar Bear dip. This year I didn't stay that long; there are only so many pictures you can get of people immersing themselves in frigid waters before it all becomes more of the same. I did briefly consider doing it myself today, but when I saw that the temperature was only 27 degrees F, I quickly changed my mind. 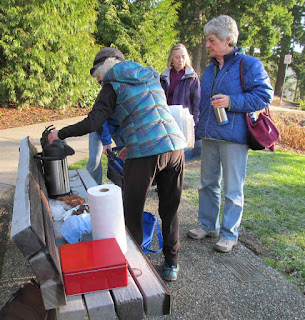 After our walk, we shared coffee and hot chocolate that Cindy had brought, and several other walkers brought goodies as well. Notice that the bench is still covered with frost (brrr!), but we were quite warm after our brisk walk. Before we left, people were beginning to set things up for the Polar Bear swim.

I feel I should mention that I checked over my blog posts for recommendations about good movies I've seen this past year, but many of them were at the beginning of the year (The Artist and The Iron Lady, for example) and were made in 2011. Ones I hope you won't miss this year, however, are The Intouchables, a French movie I just loved, and Searching for Sugarman, a documentary about a singer called Rodriguez. Last week Judy and I went to see Les Misérables, and I simply couldn't stop raving about that one. It's a musical, and there are hardly any words that are not sung. To my mind it was a masterpiece, almost more like an opera it was so grand in scale. I read all the reviews and found that those reviewers who didn't like it mostly didn't like musicals, or had preconceived notions of what the movie would be. If you go with an open mind, I think you will love it, too.
:-)
Posted by DJan at 12:48 PM