Only three of us Trailblazers showed up for today's hike. The weather took a turn for the worse on Monday, when snow began to fall. Then after we got several inches on the ground, frigid air headed south from British Columbia to lower our temperatures into the teens. I didn't move my car for three days and rode the bus to town so I could follow my regular routine. The high temperature yesterday was 19F (-7C). The snow stopped in this part of the county, close to the Canadian border, by Wednesday morning, but the temperatures made driving treacherous. I usually ride the bus anyway until Thursday, when carrying my hiking gear onto the bus makes it hard not to drive. It took twenty minutes for me to get my car ready to roll, and I was a Nervous Nelly on slippery roads all the way to the Center, which was closed. Al and Mike were in the parking lot already; we waited until 9:00am for any stragglers (nope) and then drove to Barkley Village. 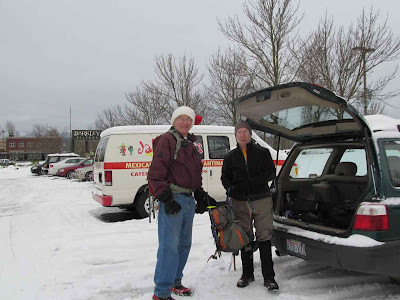 It was cold, but nowhere near as cold as yesterday. The forecast said today would be much warmer, but it didn't turn out to be really warm, by any means. The temperature was hovering around 24 on Al's car thermometer. Since we wouldn't be traveling into wilderness but staying in town, I didn't take a lunch, only water and warm clothes. We headed onto the trails behind Barkley, which were being used by lots of people with their dogs, out for a walk or run, and since the schools are closed for a second day today, kids were taking advantage of the snow. 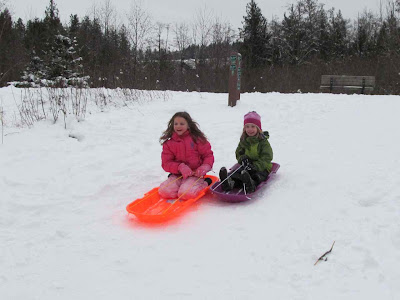 Whatcom Falls Park has 241 acres of beautiful wooded land and lots of trails, which were all covered with snow and perfect for walking on, or sledding down the hills. I saw sleds like these being used, and cardboard if the kids didn't already have sleds. (We don't get snow all that much here, and hardly ever with such cold temperatures.) It was a pretty glorious day, with plenty of trails to cover and good company, as usual. Mike took this picture of me. 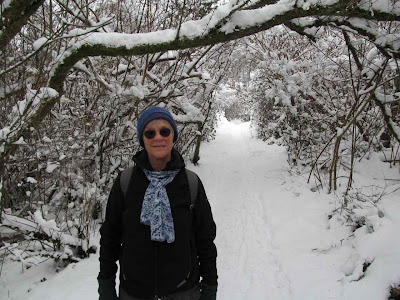 Since I wasn't wearing my big pack with a waist belt, I kept my camera in my jacket pocket for quick use. Even so, I missed some great shots, like the cute husky who came trotting by with bright pink booties. We walked to the falls and I noticed that where the water sprays the rocks and branches, some really wonderful ice sculptures met my eye. Here's one. 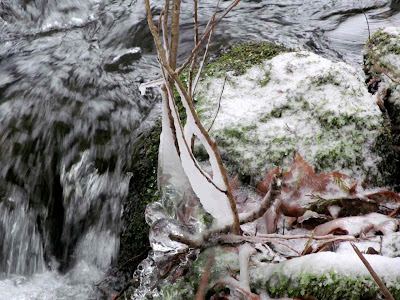 The ice and snow on these branches made a unique pattern. I thought that part in the middle looked like an eye. By the time we got back to Barkley Village, we had covered 7.6 miles total and walked up and down maybe 500 feet. Al suggested we trek up to nearby Big Rock Garden to add a bit of distance, which we did; I had never been there before. I didn't take any pictures, because nothing caught my eye, and my stomach was beginning to remind me that it was lunchtime. We had a quick lunch in the Haggen cafeteria and headed home, happy to have been out and about, even in such inhospitable conditions.
:-)
Posted by DJan at 3:17 PM