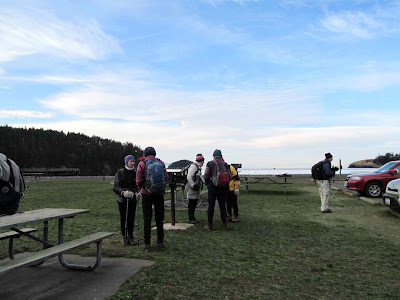 Fourteen very chilly Trailblazers drove in three cars to Bowman Bay at Deception Pass, about 30-some miles south of Bellingham, to begin our day's hike. It turned out that the slower group was also going to the same place, although they wouldn't cover as much ground as we intended to. As you can see, our day started with mostly blue skies. The other group planned to hike around six miles whereas we had set our sights for around ten miles at a faster pace. We ran into them twice. They were eleven and we were fourteen, so it was quite a sight to see when we were all together! 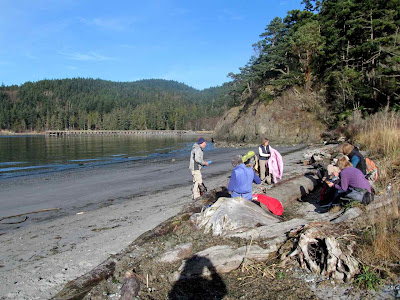 We hiked up to the old orchard above Pass Lake before returning to the bay to enjoy our lunch in quite a bit of sunshine, but the clouds came and went. As you can see if you look closely, I inadvertently put myself into this picture. The sun is so low at this time of year, it's not always easy to get out of the way. I wandered around the beach looking for some possible shots with the macro feature, and then I found that it functions nothing like my old camera setting. I got this picture of some rocks that washed up behind this bigger rock using the macro: 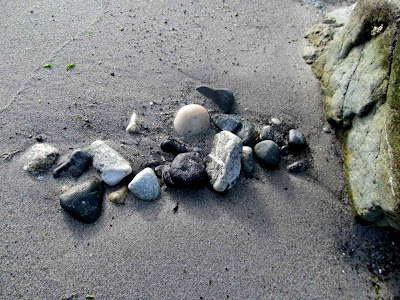 Not too bad, but also not as close as I was hoping to get. My macro feature kept moving around, depending on whether I decided to use "auto" or a specific setting. Back to the manual for me! I decided to just look down and use the auto setting to get a picture of my feet. 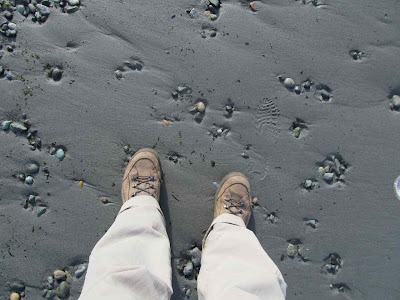 At least when I took this picture I didn't have to worry about the horizon. I cannot believe how many of my pictures are at least two degrees off level, almost always listing to the right. Thank heavens for the "straighten" feature in iPhoto. Without it, most of these pictures would not be displayed, since it embarrasses me to see them. In this one, I actually got almost exactly right, of the Olympic Mountains behind the promontory near us. As you can see, by this time there were way more clouds than blue sky. 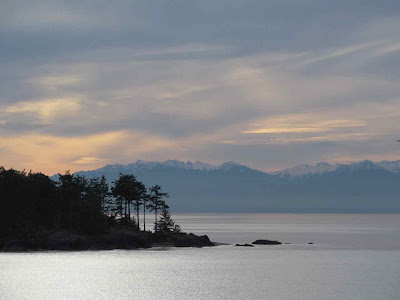 We had a pretty wonderful day, actually, covering almost nine miles, depending on the GPS coordinates we used, which went all the way from 8.3 miles to 9.5. I chose to use the "almost nine miles" generic amount, and we did a fair bit of hauling ourselves up and down hills, covering 1,700 feet before the day was done. One thing I really love about this hike is that we see numerous beautiful madrone trees, which have brilliant red bark on the outside and almost chartreuse inner bark. Here's a picture to prove it. 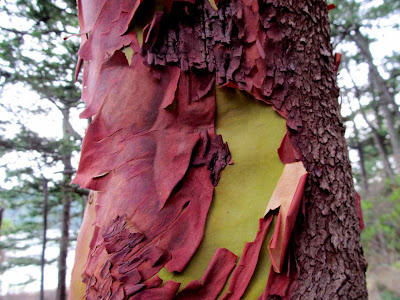 I apparently had a smudge on my brand-new lens, which caused many of my pictures to have what seems to be a washed-out look in the upper middle quadrant. However, I was pleased that it managed to soften our faces in this picture, Holly and me, to make us look rather fabulous standing in front of the Deception Pass Bridge. This is me being shameless about wanting to put a picture of myself in this post. At least Holly is posing with me. 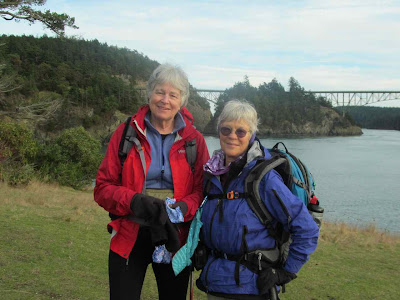 I found the pesky smudge on my camera while we were driving home, and I think it will not be present in any further pictures, but I won't know for sure until I've taken a few more. The main thing is that it was a rather wonderful day, and I happily await my new iPad arriving tomorrow! Life is good.
:-)
Posted by DJan at 5:37 PM