The Whatcom birding group sends around pictures and information about local birding, and members have been capturing pictures of the rare influx of snowy owls that has been going on in this area during the fall and winter. I found an article in the Seattle Times about this phenomenon that only occurs once in a great while. The article tells me they will be around here until March, when they will return to the Arctic for the breeding season. I have been enjoying seeing the wonderful pictures pour in of these magnificent birds. On January 8, Fredrick said about this picture:

They are so beautiful! And I don't even have to leave my home and go looking for them; I've received at least a half dozen really beautiful pictures. I have also been traveling around at various times and places and taking pictures with my new camera. Sometimes they turn out well, and sometimes, well... I need to find the right settings. This one was taken right at sunrise after I got off the bus. 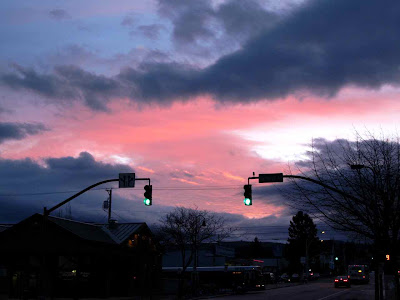 I was hoping to find a setting that would capture the color in the sky, which this did, although it was much more vivid just before I started fiddling with the settings. I figured I'd better just go ahead and snap a picture. The bus station is on the left in the dark, but lightening it up enough to see detail there washed out the sky. Before heading to the coffee shop, I tried out a camera setting that is supposed to capture vivid color and is called "foliage." I looked up at a nearby tree and took this one of the leaves and berries, and it does seem to be more vivid. I'll have plenty of chances to use this particular setting, I suspect. 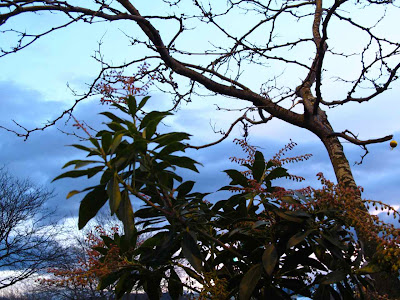 It makes me excited to find out all the things my new camera will do for me. It's also got a fish-eye setting and a wide angle setting. Those, plus the macro feature on this camera, are still to be tried. The good part is that things in my part of the world are beginning to settle down, back to normal.

Last thing: my Social Security showed up in my new bank account this morning, so I decided to go ahead and order myself a new iPad! A friend sent me a link with information about the iPad3 that is likely to be coming out in the spring or summer, but the new features are not anything I'm really interested in (faster processor, better camera). I was so happy with the iPad2, and I still miss it more than anything else. Soon I will be enjoying it once again. I'm smiling right now and feeling a lot of gratitude.
:-)
Posted by DJan at 1:55 PM