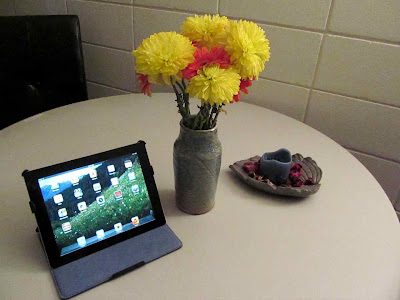 There is something to be said for ordering items a bit later than for the holidays or when an item first comes out. I found on Tuesday that my Social Security deposit would be coming to my new checking account as hoped, so I got on the internet and ordered myself a new iPad. On Friday it arrived!! Using the "ask an expert" chat feature on Apple, I asked how to restore my new iPad to have all the apps and pictures I had on my stolen one. It was easy, since I had backed it up on iTunes just two days before the theft. All I lost was the "Kindle for iPad" app I had loaded the evening before, so all I needed to do was reload it and all my books were there in the Archives folder. It was seamless. When you plug in a new iPad, it asks you if it is to be treated as new, restore from iCloud, or restore from iTunes. I was impressed.

The flowers are from Smart Guy. When I ordered the new iPad, he was happy for me, and when I came home from my workout, these pretty mums greeted me. I've been burning that candle to light up the darkness in the evenings, as I wrote about here. I'm amazed to realize that we are almost a third of the way through winter. And we are gaining more than two minutes a day to the length of each day.

Yesterday my friend Judy and I went to see The Iron Lady. Although the reviews are not stellar, it's certainly not because of Meryl Streep's performance. She is simply outstanding as Margaret Thatcher. The critics apparently are not fond of the fact that the movie concentrates too much on her later years, but I thought that was expecting the movie to have been more inclusive of her accomplishments, rather than a look at what happens to us all: no matter how famous and accomplished a person might be, by the time we get into our eighties (she's 86), we all become a shadow of our former selves. I thought the movie was wonderfully done and entertaining. I immediately got on Wikipedia (link provided above) and learned a bit more about Thatcherism. The depiction of her husband Denis in the movie (played brilliantly by Jim Broadbent) showed how a couple becomes dependent upon one another, even when one of them has passed on. The makeup artists who made Meryl age so perfectly deserve an Oscar, too. I'd love to know what you think of this one, but if she doesn't win THIS time, there's no justice. I thought she deserved it for portraying Julia Childs so brilliantly, but this portrayal is unbelievably perfect, IMHO. 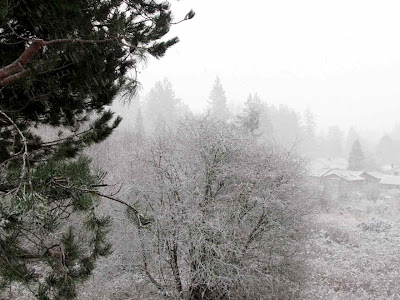 I just peeked outside and saw that it's snowing! You can see the snowflakes falling in the upper left against the dark leaves. I don't know how much will actually accumulate, but right now the view from my front porch is lovely. We have been expecting this snow, and the temperature should plummet in the next couple of days before warming up just in time for our Thursday hike. I know I am being optimistic, but since I get to choose my state of mind, why not?
:-)
Posted by DJan at 11:34 AM