Glad I'm not a songbird

One of these days I might be informed enough to be able join the birders around the area in the December bird count, since I study all the pictures I receive from the Whatcom birders group. But as of now, I am still at  loss when I see one, unsure of the species. Joe Meche sent the above picture around with the following information (22 Dec 11):


Seems like today was a raptor-rich day, so I thought I'd offer one more for a nightcap. The Semiahmoo water tower peregrine was taking in the morning sun and keeping an eye on the Dunlin flocks on the flats at Blaine.

Yesterday while I was struggling to learn more about Pixelmator, I saw a very large bird come onto the front porch. When I looked up, it was gone, and so were all the songbirds. They stayed away for a long time, making me wonder if it was my own resident Cooper's Hawk. If it was, he probably got one because he didn't come back. I've seen him on the porch more than once, and those raptor eyes and beak just give me the shivers. As I said in the title, I'm sure glad I'm not a songbird!

Since I have five feeders on my porch, the birds know this is a place where they can get a handout. And this also attracts the raptors, who see the fat little birds and figure if they can be fast enough, their own stomach will be full, too. It's just the way of things. At first I had a hard time thinking of the songbirds being seen as prey, but I've gotten over it, for the most part. It also bothers me when it's terribly cold and windy, as I picture the little creatures huddled in the trees and bushes waiting for the weather to change. When it's like that, I put extra seed out, and they are always visiting, sometimes in amazing profusion. 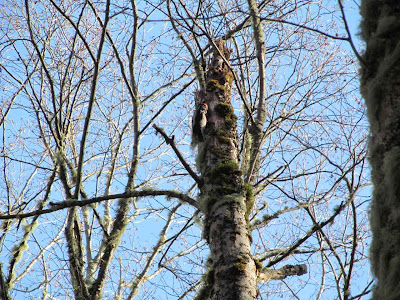 On last Thursday's hike, we spied a hairy woodpecker (at least that's what I think it is; it looks like a downy but it's much bigger) rat-a-tat-tatting away on this tree. You might need to enlarge the picture to see it better, but the little spot of red on its head was what I was trying to capture with the camera. It's not the best, but I would need a very different camera to get a picture as good as Joe's. And then I wouldn't want to take a big expensive camera on our hikes in all kinds of weather, so I have reconciled myself to this compromise. Plus I still get all the Whatcom birders' pictures to enjoy, and there are a lot of really good ones.

Tomorrow Judy and I are going to see Albert Nobbs. If you don't know anything about this movie, Glenn Close plays the part of a woman who disguises herself as a man in 19th-century Ireland. She's been nominated for an Academy Award for her performance, and if she wins instead of Meryl Streep (as Margaret Thatcher), I want to know why. I also noticed that Jean Dujardin won the Screen Actors Guild award for Best Actor, along with already having won the same thing at the Golden Globes (of course the enlightened Globes have two of these, one for drama and the other for comedy or musical). I will be watching the Academy Awards and rooting for Dujardin over Clooney. Not that I thought Clooney wasn't wonderful in "The Descendants," but I'm a romantic. For Dujardin to win Best Actor in a part where he doesn't say a word (well, he does say two) is just plain old romantic!
:-)
Posted by DJan at 4:29 PM