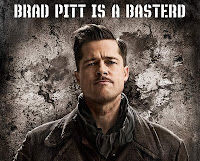 Last night I went to see the musical Cabaret with my friend Judy and her daughter-in-law Amy. We went out for dinner and then to the theater to make a night of it. I have seen the movie version several times and knew the story and the music very well, but Amy hadn't ever seen it before. I keep forgetting that the younger generation doesn't have the same background I take for granted.

I woke up to the theme song "Life is a Cabaret" and "Money" reverberating in my mind and thinking about the play. The version we saw at the Mount Baker Theater had a very wonderful actor playing the part of the Emcee (for those of you who remember Joel Gray in that part). So, in keeping with the theme of movies about Paris during the Nazi occupation, I watched Inglourious Basterds today, which has been sitting on the side table for weeks now, with me not willing to deal with Quentin Tarantino's penchant for violence but really wanting to see the performance by Christoph Waltz, which earned him every accolade out there for his performance as Col. Hans Landa.

I am really glad I watched the movie today, on Easter, thinking of what I want to resurrect and what I want to let go in my own psyche. If you have only seen the trailers for this movie, you will be surprised when you finally do see it. It's not what you think. Yes, there is violence, but it wasn't as bad as I expected it to be, and less than "Saving Private Ryan," which I cannot bring myself to watch again. I could see this movie again.

As usual, as soon as I finished watching the movie, I went over to Rotten Tomatoes to see what the "freshness" rating is and was pleased to find out that 89% of the reviews of the movie have been positive. Brad Pitt is funny and offers almost comic relief when compared to the scary brilliance that Waltz portrays. One reviewer (the Oscar Guy) says it very well:


Waltz is anything but humorous. He plays a character so repugnant and vicious that his mild manner and friendly gestures belie a horrible temperament, which perfectly captures the charisma inherent in the Third Reich that allowed them to so effectively creep into the minds of the public and encourage them to support their evil machinations. He clearly recognizes the needs of the role and executes them perfectly, shifting from French to German to English in character with the ease of a studied actor.

But what of the epiphany in the title of this post, you ask? Well, it was about some of the feelings I had while watching the movie. After being pensive thinking about what the Nazi occupation did to the French and the Jews in Cabaret, I began to root for the vicious killers who were on the "right" side of the violence in Tarantino's movie. And then the realization hit me: I was feeling justified in my desire to watch them suffer, in effect becoming like them. Also from the Oscar Guy:


The viewer rejoices in what happens on the screen, but does not recognize how alike that response is to those of the Germans in the film. We are at once repulsed by their reaction, but celebratory of their own demise to that point. And I can fully attest to those same feelings. There’s a certain satisfaction in seeing the events as they transpire at the end of the film, but if we can recognize that in ourselves, it makes us far better able to amend our ways so that we don’t take that slippery slope towards exclusion, prejudice and injustice.

Amen. That's the epiphany. The thing that keeps these things going on in the world from generation to generation: a desire for revenge, to see "justice" done, to keep alive all those feelings that I really want to see gone from the world. I have a duty to see the humanity in the struggles of all of us toward the light, toward wholeness. The place to start is in my own heart.
:-[
Posted by DJan at 4:14 PM