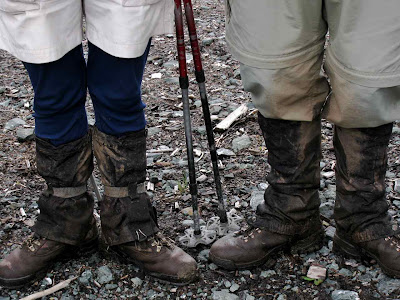 This picture does not show, except in the barest way, how muddy our hike was today. Seventeen Senior Trailblazers headed out to try a new Olsen Creek/Stewart Mountain hike that was mapped out on Tuesday by our intrepid leader Al. He wrote about it at length on a GeezerHiker post, if you want to know why we went on this particular trip. As it turned out, it was filled with adventure, not just because we hiked most of the day in deep mud, you know the sucking kind where a foot placement would leave you with an audible attempt to pull your foot back out of the deep mud. 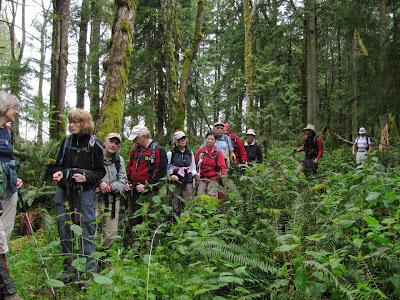 The group was game for this hike, though, because we had been warned by the description of it being at least ten miles long and rated "hard." It was actually almost twelve miles and 2,500 feet of elevation gain and loss. Once we left the logging road (after a mile or two), we started to hike on an old horse trail that wound definitely uphill. The trail was pretty evident from the horse apples and water-filled depressions left by those horses.

By the time we got to the steepest uphill, we had a mishap: Ward took a step off the side of the hill! When I turned to see what the commotion was, I saw him falling downhill head over heels! I saw him take several complete revolutions before he came to a stop about fifty feet from the top of the trail. 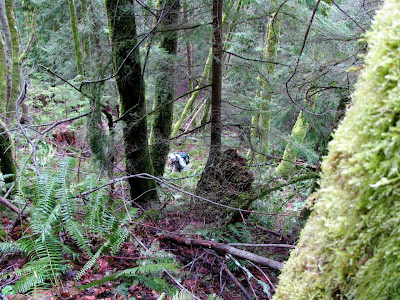 Way down there amongst the trees (click to enlarge) you can see Ward climbing back up to us: no obvious injuries, and he managed to avoid hitting a tree, breaking his neck, or doing anything worse than losing his hat and water bottles, which he found on his way back up to us. Ward has now officially relinquished one of his nine lives. It is amazing that nothing happened to him, but I cannot help thinking that tomorrow he will feel some bumps and bruises. 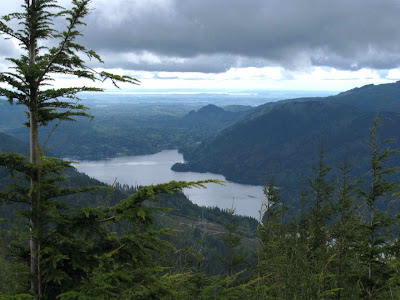 When we stopped for lunch, we had a beautiful view of Lake Whatcom, although the view of the Twin Sisters and Mt. Baker were obscured by clouds. This was not a bad consolation prize. The rain kept away from us most of the day, and we only had the occasional sprinkle. After lunch, though, we headed down through a logging operation, which was pretty depressing. I couldn't help but think of all the birds that had built nests in the doomed trees. I won't show you any pictures of that because it was just too darned gloomy. Instead, I will leave you with a picture of the beautiful trillium flower, three petals, three leaves, and only visible for a short while in the springtime in these parts. 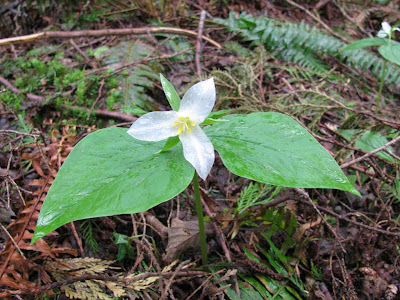 At the end of the hike, we had a little confusion about where the parking lot was, but we were so tired that when we finally reunited, we dragged ourselves back to our respective cars, drove back to the Senior Center, and hobbled to our homes. And of course I wanted to share with all of you the muddy adventures, so here you are!
:-)
Posted by DJan at 6:31 PM