Trillium time in the Chuckanuts

Today eight of us Trailblazers went to three different destinations in the Chuckanuts: Chuckanut Falls, Raptor Ridge, and Madrone Crest. The weather forecast gave us a 90% chance of rain for the day, with showers in the morning and rain in the afternoon. But we woke to sunshine, not rain, giving us hope for another not-too-wet hike. We were rewarded with a dry day after all, but the sun left before we even began to hike at 8:30am. 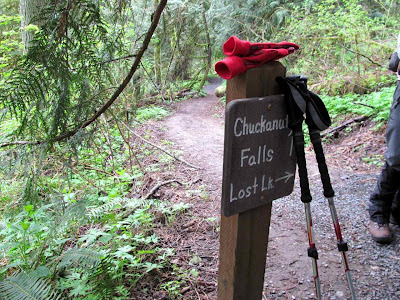 Our first stop was the falls, a short side excursion from the Hemlock trail. This is a fairly new trail in the Chuckanut trail system, and the falls might be more spectacular after a heavy rain, but we were happy to see it, some of us for the first time. It's certainly green around the falls. Early in the day, my trillium pictures all had their heads hanging down from the previous night's rain. 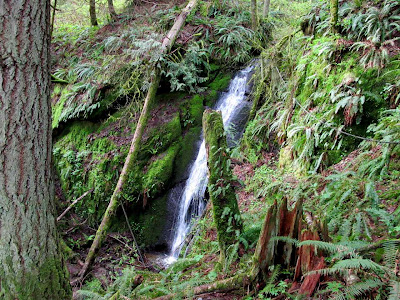 I tried to get a picture of the falls without the log in the foreground. Since it wasn't all that good, I decided to appreciate all the green ferns growing out of the log. Our next stop was at Raptor Ridge, a couple of miles farther up the trail. The view from the ridge was diminished by low clouds, so as we left we played with our poles, making them resemble crossed swords. I asked Peggy to come back under them so I could capture a shot of seniors acting silly. It was fun and made for an interesting picture. 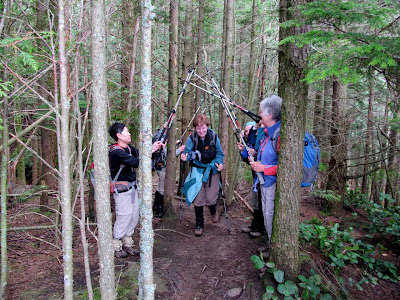 Our last stop was at Madrone Crest. The madrone trees are almost all gone now, but the trail is one of my favorite places, and if you're lucky you can get a view of Mt. Baker. We didn't expect much, since Raptor Ridge was basically socked in, but we were fortunate indeed. Still no rain; although the low clouds spit at us now and then, we stayed dry. Every moment we expected a deluge. 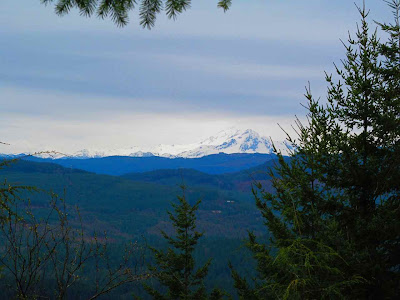 By the time we had our lunch at Madrone Crest, we had traveled more than seven miles and had plenty of distance still to go. The hike was intended to be shorter, but since it never did rain, we kept on going, making it almost ten miles by the time we got back to the cars, and covering almost 2,500 feet of elevation up and down. When we returned to the Senior Center and I got out of Al's car, my stiff old body groaned and creaked a fair amount. 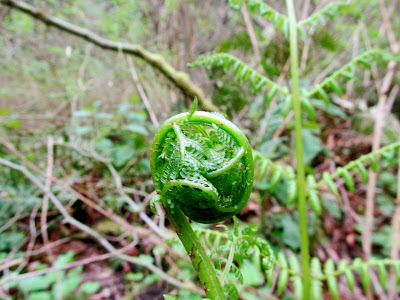 Not only the trillum flowers are out everywhere, but the ferns are unfurling. This bracken fern will be out in a day or two; they are so fascinating to observe on their way to becoming full-fledged leaves. I took this picture just as we finished our hike. I had tried all day to get a good shot, but they kept being fuzzy in the low light, and my cohorts are likely to leave me behind if I fiddle around too long. The light wasn't perfect, but this one WAS in focus! It's probably unfurled more than this already.

But I wouldn't know, since I'm home, warm and toasty. And tired. Once I get this on line, I'll go pour myself a glass of wine. It's time to relax for the evening.
:-)
Posted by DJan at 3:47 PM