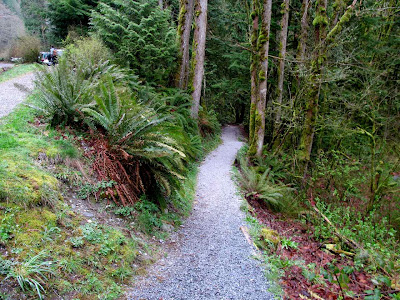 Eleven Senior Trailblazers met to hike the Chuckanut Ridge today. This is the start of the trip from Arroyo Park. It's rated hard, and I went back to past year's hikes to remind myself why (we did this trek in March 2011 and March 2010). What I remembered most about this particular trip is all the ups and downs, with little to no level ground. We began on the Interurban trail and took a side trip up the Salal trail that added another mile. 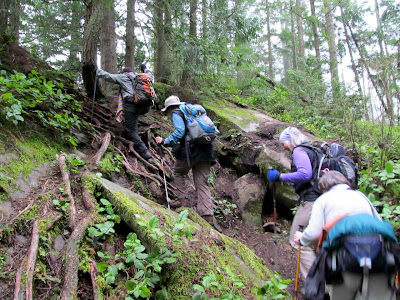 I noticed that last year I took a picture in this exact same spot, because it's a particularly strenuous uphill followed by an exposed section with a precipitous drop. (Last year's post shows it better, but you get the picture. Peggy has been on all three hikes, I see.) Today's weather forecast was sort of in the middle: maybe some sun, maybe some rain. We got no rain, although the last few days have been pretty darn wet, and at the beginning of the day we hoped for views but instead got a bit of fog rolling in. 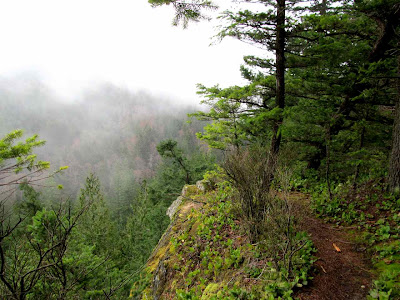 Our trail is on the right, and the fog obscured any views we might have had, but we were all in a pretty good mood since it wasn't RAINING. After this picture it was a bit on the cool side; even though we continued to keep moving. We knew that by noon we would make it to Gates Overlook for lunch. By the time I took this picture, my stomach was making editorial comments (Hey, I'm hungry!). 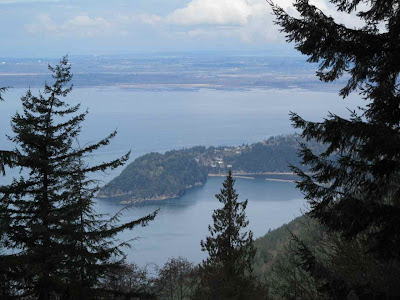 Once we got to Gates Overlook, the skies were beginning to clear and we actually had some view of Bellingham Bay. From this point on, we had more and more sunshine to lighten our moods. We started our downward trip back to the cars. Although we missed a shortcut, it still wasn't unpleasant as we hiked the trails. I was beginning to get a bit tired and my back hurt quite a lot, so Mike was sweet enough to carry my pack down the last couple of miles. 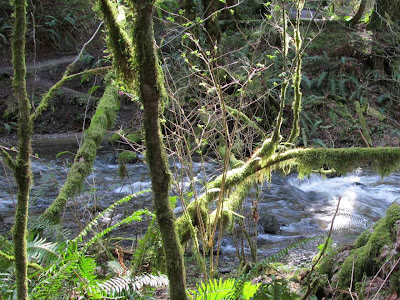 By the time we got to the stream on the home stretch, there was much more sun than clouds. Now, as I'm sitting at my still functioning iMac and writing this post, it's almost all sun and just a few little white puffies making an appearance. It's simply a beautiful day. Holly was on today's hike, and she sent me her GPS coordinates, showing that we went more than twelve miles (by her estimation). Al's GPS showed a more likely 11.2 miles, but both showed that we went up and down more than 3,000 feet of elevation. That's definitely considered to be "hard." Here's Holly's track record:

You see it was an out-and-back trip, mostly. My knees are complaining a bit, and my back is complaining a lot. Without the poles, I couldn't have completed it today, I'm convinced. But even so, going such a distance and returning to the cars in one piece is worth some congratulations to all of us. Frank, being 81, was slowing down a bit at the end, but he was still smiling when we reached the cars. I have a few years before I'm there, but he is an inspiration. If I just keep on hiking, perhaps I'll be writing about it in another decade or so. I hope so.
:-)
Posted by DJan at 5:28 PM