That was some March we had

I know that most of my blogging friends live in states that show up as red in this graph of last month's temperatures, and there's one state that was actually below normal. Guess where I live? Up there in the only blue-temperature state on the map! Not only that, but the entire West Coast had above-normal precipitation amounts during March; many of the soggiest places were on the West Coast, too.

Before we moved to Washington state, I lived for more than three decades in the ONLY red square on the precipitation map. I'm trying not to take it all personally. But I take heart in the fact that Texas has been in a severe drought, and now it seems like maybe it's easing up a bit. I know from a couple of my blogging friends that things are greening up quite nicely down there. Kind of shows why... and the Texas bluebonnets are everywhere in profusion. 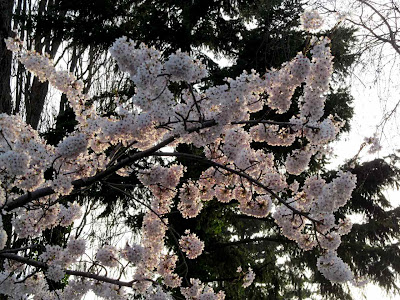 We have just finished having a beautiful weekend with sunny skies, and on Easter Sunday Seattle reached 70 degrees F for the first time this year. Last year, we didn't hit 70 degrees until May 20! So, this Pacific Northwest springtime has suddenly turned incredibly lovely, with all the birds singing and flowers blooming everywhere. I took the picture of the blossoms on my way to the bus yesterday morning. And what is raising my spirits to no end is that for the first time since last fall, I'm seeing THIS as our predicted weather for the next period:
Zippity-doo-da, Zippety-YAY! My oh my what a wonderful day... plenty of sunshine comin' my way, beautiful feelin', beautiful day. Hope it's gonna be nice in your part of the world, too. We are so ready for this.
:-)
Posted by DJan at 3:28 PM