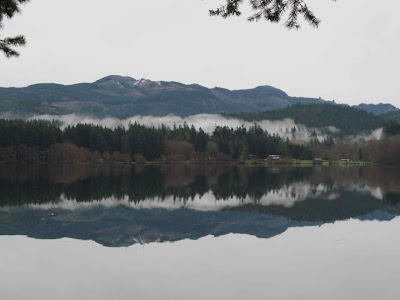 Yesterday morning on our walk twice around Lake Padden, the lake was as still as I've ever seen it. (Don't forget that you can enlarge these pictures to get the full effect.) And you can see that it wasn't raining, although it rained all the previous night and started up again just as we finished our walk. Whatever the reason that I've been so fortunate to be catching only a few raindrops, I'll take it! You can also see that there is no sunshine, but I'm used to that. One person was grumbling about the fact that it was the last day of March and here we were, all bundled up, hats and gloves and rain gear, with no end to the gloomy weather in sight. 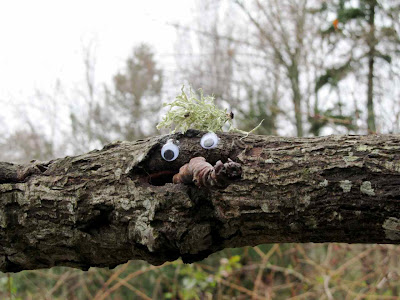 Towards the end of our walk, we spied this cute little face that someone had created (affixing the eyes above the "nose"), and we added a bit of hair to complete the whimsical creature that will cause a few people who walk around the lake to smile, I'm sure. You had to be looking up at just the right moment to see it; we missed it the first time around. A few of us decided to head to the Avenue Bread coffee shop in Fairhaven to warm up a bit after the walk, and we had to walk around this determined but very lovely dog who wouldn't take his eyes off the door. 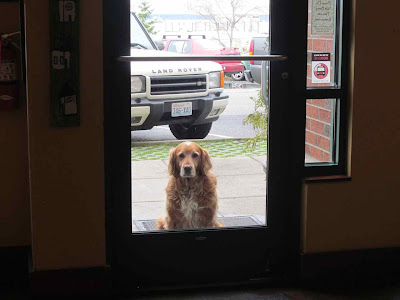 I learned from a nearby patron that the dog (and his owner) are regulars at the coffee shop. This is a familiar scene to many Fairhaven coffee drinkers. He's awfully pretty, too. (He might be a she, I didn't actually take note, but the devotion is unmistakeable.) And, of course I have to add in the photo safari a picture taken at MY local coffee shop (Avellino's in downtown Bellingham) of Leo and his dad Robert. It's interesting to see that their expression is exactly the same; only a few decades separate one from the other. 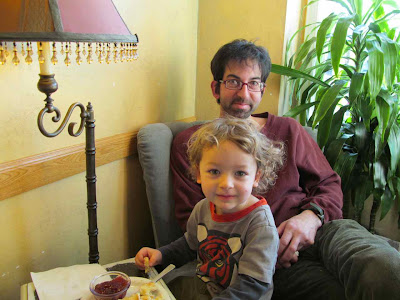 When Leo looks at pictures of himself, he tells me the story of each t-shirt he's wearing. I am always happy to get to spend time with him, since our visits are now interrupted by preschool. Dad brings him most mornings to the coffee shop to give Mom a break and for Leo to have breakfast. His current project is to move away from diapers. Now that he is in preschool it's not much fun (according to Leo) to wear them and he's anxious to be a big boy now.

Last week when I began these photo safaris, I was surprised by how many of my readers seem to enjoy them as much as I do, so it might become a weekly or biweekly event. I took this picture last Thursday and I couldn't work it into my post about the hike. It was so nice to hear the crashing of the waves on the beach as we walked close by; we planned to walk along the beach on the way back, but it was raining too hard by then to be very inviting. 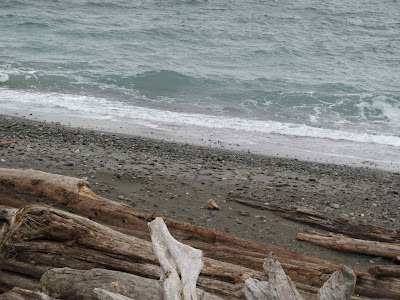 I was a little morose this morning as I wrote my morning's blog post for Eye on the Edge, so this post gives me a chance to be more upbeat, talking about my pictures and my beautiful home town. It's true that I do get a little depressed by current events, but the beauty that surrounds me is always uplifting. One person sent me a private email and relayed to me that she wakes up and names five things to be thankful for. I think it's a great idea and if I had done that, my post would have taken on a much different flavor. I'll start tomorrow morning, right when I wake up. Thank you, PK!
:-)
Posted by DJan at 12:47 PM