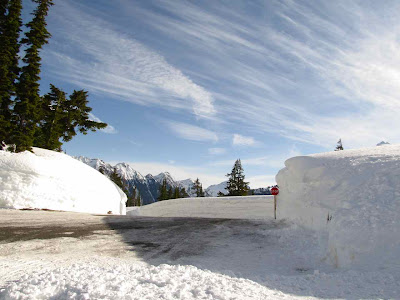 Al sent around an email to the Senior Trailblazers last week suggesting that we might take advantage of the incredible weather we've been having here in the Pacific Northwest and get out for a snowshoe adventure. The snow fell more than a week ago, and every day the avalanche danger has been less, so today, Monday, five of us took him up on his offer and drove from Bellingham to the parking lot at the far end of the ski area to start up to Huntoon Point, a place I've visited a few times before. In the picture above, you can see the end of the road to Artist Point, with a stop sign and a little bit of snow. Nowhere to go from here, take my word for it, except to strap on skis or snowshoes and head into the wilderness. So that's what we did. 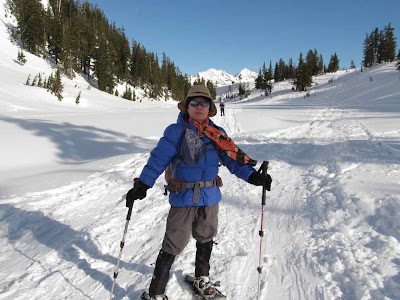 This is Amy, the other woman on today's trip, all decked out and warm as we headed up Cardiac Hill. We've all been up this way before and know that we know we will cover a fair amount of elevation in a short distance. The day was perfect, a light breeze and sunshine that just wouldn't stop. I had slathered on the sunscreen and Mike frantically pawed through his pack looking for his sunglasses, which he apparently left at home. Fortunately, Amy had an extra pair, and we were just fine after that little glitch. Cardiac Hill goes straight up for quite awhile, but we all managed pretty well. Here's a picture of Steve leaving the rest of us in the dust. 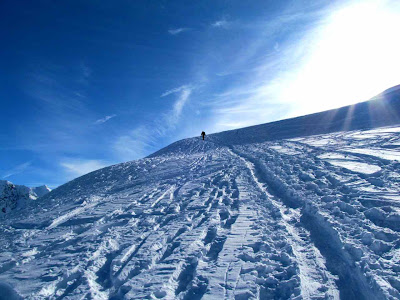 That tiny black dot, that's Steve following a well-traveled snowshoe track up to Huntoon Point, where we would have lunch. The day was so perfect that we decided to spend a bit of time exploring around the area and checked out some snow pits that must have been created by a class, teaching people how to survive if they end up in the wilderness unexpectedly. 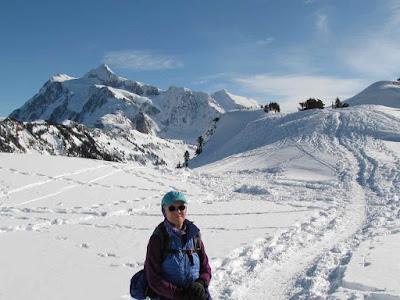 On the way to the point, Al took this picture of me in the foreground and Mt. Shuksan in the background. It's one of the most beautiful mountains around here (I've taken many pictures over the years), but I wanted to show how incredibly SUNNY and bright the day was. My new transition lenses worked perfectly, BTW. We met a few others on the way, but I'm sure the numbers are way down from the weekend. The only thing we had to deal with was plenty of snowshoe, snowboard, and ski tracks from people who were in this beautiful place before us. 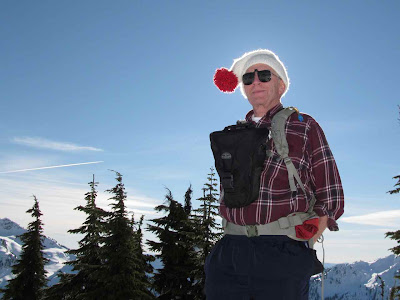 My new camera caught this picture of Mike with the sun behind him, lighting up his hat and pretty red pompom during our lunch stop. We are at Huntoon Point and the only disappointment was that Mike hoped that the grey jays would visit us so we could take picture of us feeding them from our hands. He brought the bird seed and was waving his hands in hopes of enticing them to join us for lunch. But it was not to be. We did see some ravens circling and playing in the wind currents, but they didn't care to join us. It wouldn't have been the same, anyway. 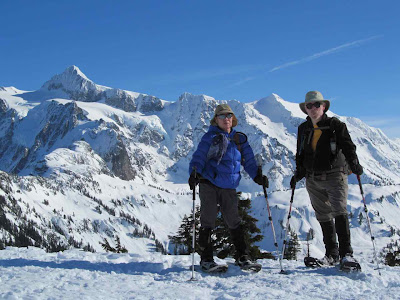 When we headed back to our car and our journey home, I got this picture of Amy and Al, with Shuksan behind them, not to mention the continuing beautiful blue perfect skies. We didn't cover much distance, considering, a little less than five miles on snowshoes, but it seemed much farther. We did ascend and descend around 1,800 feet of elevation in those miles, which helped to make the day into a good workout. With the sunshine, the company, and the delight we had in being outdoors on such a beautiful day, I'm definitely not complaining.
:-)
Posted by DJan at 6:19 PM