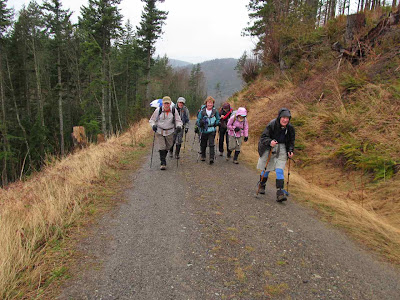 Ten of us hardy Trailblazers headed out to Cub Creek (on the south side of Stewart Mountain) in a light rain. At first it wasn't too bad, but it was already raining when we started our hike at 400 feet elevation. As we ascended another 2,200 feet, there were times when we were in the forest canopy and stayed pretty dry. We even thought maybe it wasn't raining all that much. 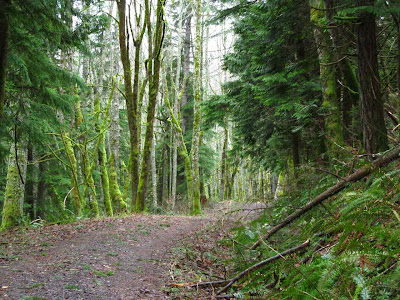 We only spent perhaps a mile or so on these roads, the rest of the time we were on trails. We spent some time on the roads traveling under huge power lines, which were singing so loudly from the humidity they sounded like running water. Sometimes they hum, but today they were just... loud. Everything is very green from all the rain we've been having, but once we hit the road higher up, the rain changed character, to snow. 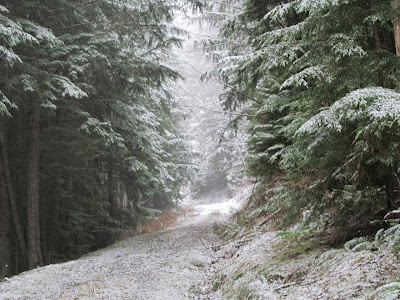 This picture is what our upward trajectory looked like, once we had passed the power lines. By this time, since we had been traveling upward pretty steadily, we were all warm and toasty, but the wind had picked up and when we stopped for any time at all, we began to get chilled. It just didn't seem to make much sense to continue upwards, because any place we would stop for lunch would be cold and uncomfortable. So we had a conference. 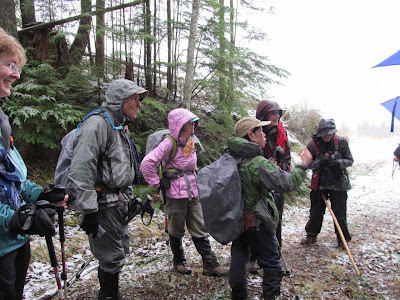 We determined that we would descend into the trees and then decide whether or not we wanted to find a fairly dry spot to stop for lunch, or head back to the Senior Center, where it would be warm and dry. Just stopping for a few minutes we began to get cold, so without delay, we descended into the trees. Hiking downhill makes it harder to stay warm, and by this time we all wanted to get moving. Here you can see the power lines, and our trusty leader who had forgotten his raincoat. Al is wearing a plastic poncho he brings along in case of an emergency. This seemed to be an appropriate time to put it on. 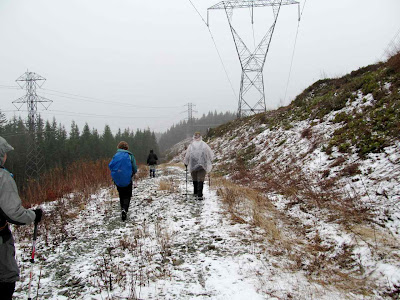 We are actually heading downhill in this picture, although it's hard to tell, and we stayed in the snow until we reached the trees. At this point the wind was pretty strong and kept us moving until we were out of its range. One nice thing about trees on the trails is that they block not only the rain but also the wind. 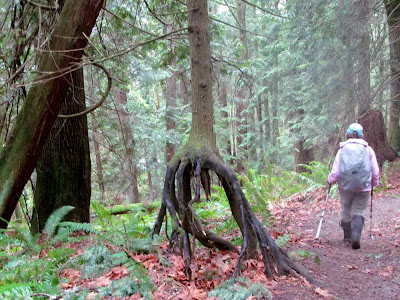 I may have taken a picture of this interesting tree before, but I was struck by it again today. There was, at one time, a "nurse log" under this still healthy tree, causing it to send its roots down into the ground around it. However, now the log or stump is gone, having done its job, and the tree now looks a little like it could just walk away.

By the time we reached the cars, we had covered somewhere around seven miles up and down in almost four hours, with very little time standing around, and managed a 2,200 feet elevation gain and loss. It was a, yes, wet day, with no views, but I still had a good time and sure enjoyed my warm and dry lunch at the Senior Center! Hoping for better weather next week.
:-)
Posted by DJan at 3:36 PM