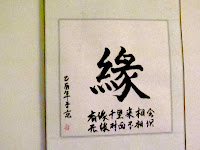 This scroll hangs on the wall in our living room. Smart Guy bought it on our last trip to China, and I like to look at it and ponder the brush strokes. It is the Chinese character for "Destiny." Or at least that's what I thought it was for all these years, but when I went to Google to look it up just now, it's not the one that comes up. It looks entirely different. Hmmm. It makes me wonder what the meaning of this symbol really is. Whatever it means, it has always drawn me to think of movement. We move through life, through our years on the planet, and one can imagine that our destiny in some way, is preordained.

I've been wondering about my mental faculties lately. I've always had a facility to remember numbers; telephone numbers are very easy for me, and I don't often need to look up a number more than once or twice, even if I don't call it very often. The other day I went to the Food Co-op and usually give the five-digit account number to the cashier, but I simply couldn't remember it. I was disconcerted, so she looked it up for me and for the past week it is there in my memory banks. At the bird store a few days ago, I was telling a story about seeing a hawk come right up to the porch where I was standing, while I was outside. I said, "it landed on the..." What? She looked at me and I had a complete blank, and I said, "you know, the thing that keeps you from falling off the porch." "You mean the railing?" Yes! Of course, the railing. Another uncomfortable moment, which passed, and I have THAT word right on the tip of my tongue now. But where was it at the time? What is happening to my prized possession, my memory?

Years ago I was worried about the fact that I was forgetting things, and when I went to my regular doctor for a checkup, I mentioned my concern to her. She ended up giving me a test. When I read the novel about early-onset Alzheimer's, "Still Alice," I wrote a post about recognizing the test she gave me as being the same one that Alice was given that confirmed her diagnosis. Although I made a few mistakes, I was reassured that the memory loss I was experiencing was normal.

It does seem progressive, however. What causes those little brain farts that come increasingly more frequently? Do you have them, too? I know that I am doing all the right things to keep myself from becoming more disabled by memory lapses than I already am, but it is so worrisome that I'll ask my new doctor if he will give me the test and let me know if I'm okay or not. What do you do if you find out you have developed a "condition"? Sigh. I hope I don't find out. In the meantime, I'll continue to exercise both my body AND my mind.

On another matter, tomorrow I'll be watching the Oscars and hoping my favorites will win at least a few awards. I'll go to bed having been saturated with beautiful gowns and jewels, and hopefully won't be too awfully bored. Sometimes I just wait until the next day so I am not tied down by three hours of rather dull reality TV. Bet some of YOU will be watching, too.
:-)
Posted by DJan at 3:52 PM