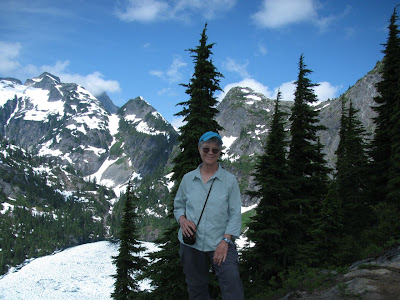 Only four Senior Trailblazers showed up to drive the 84 miles south of Bellingham yesterday and take in the sights at Thornton Lakes. I am standing at our high point of 5,050 feet, the ridge, with Thornton Lake still frozen below me. In the cirque behind are two smaller lakes, both of which have the name "Thornton," which we could not see. The view was spectacular, wouldn't you say?
Once we drove past the town of Marblemount, we turned off the main road onto a well-maintained steep side road for five miles up to the trailhead, which not only goes to the lakes but also to Trapper Peak. We met some hikers at the junction who tried to make it to the peak but were turned back by snow and some treacherous spots.
Our goal was only to make it to the ridge above the largest lake. We did consider hiking along the ridge, but the snow was making the hiking more of a chore, so we called it a day once we got to the gorgeous view in the first picture. A few of the stream crossings were not exactly easily forded. In this one you see Al doing what I also did: shinnying across on our behinds. Although it was possible to walk carefully across, like Fred is doing, a slip would not have been fun and could have been disastrous. Just because I jump out of airplanes does NOT mean that I am fearless, believe me. 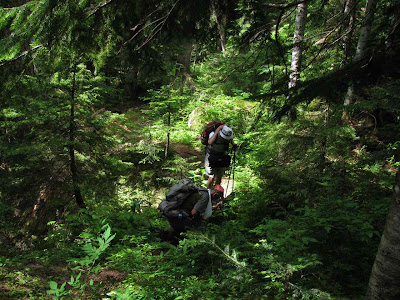 Most of the trail (the first four miles) are in lush shady forest, as you see above. Mike (in the white hat) had just asked Fred to dip his hat in the stream below so he could pour ice-cold water over his head and down his t-shirt. Although you can't see it in the picture, there IS a stream there, and Mike is actually gasping from the cold water that is now running down his torso. The day's temperature was delightful, but whenever we reached some full sun, I realized how very hot we would have been without all those trees. 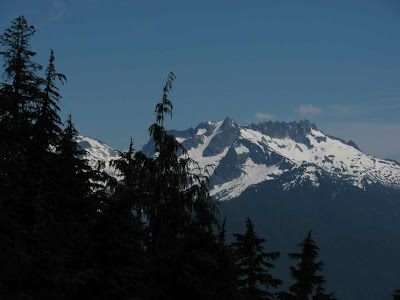 Driving down to this part of the North Cascades for a hike meant that we were unsure of the names of the peaks we saw. This one I believe is called the Horsemen, and I love its jagged ridge and sharp peaks. It was simply an amazing day, filled with adventure because of the new terrain and sights (and stream crossings). I would return there again in a minute. Although the ten miles we covered were not really difficult, for some reason I was very tired and sore by the time we reached the car. Our total elevation gain and loss was 2,750 feet: moderate when compared to some of our other hikes, but plenty for us yesterday.

When we drove back to Marblemount to find a place to have dinner, we learned that a downed power line had caused the entire town to be without power since 11:30am, so we drove on to Rockport and went to the only place in the little town to eat, the Rockport Pub. It was quite satisfactory, and by the time we arrived back at the Senior Center just before 8:00pm, there was no chance I would write a post yesterday. Just getting home and relaxing was enough to tire me out! Today, however, I have gone to the Y and taken my Strength and Tone class and made it home in time to write this post. Mission accomplished!
:-)
Posted by DJan at 11:54 AM