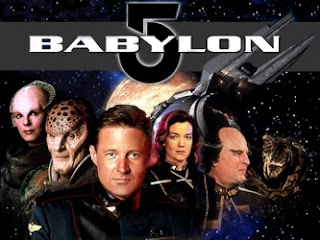 When I first met Smart Guy, he was living in San Francisco and I was living in Boulder. We met through the skydiving internet (rec.skydiving), first making contact through email, then phone calls, and finally beginning to meet one another in person in 1992. It was amazing to me to meet another person my age who would let me talk about skydiving as much as I wanted (remember I had only begun to skydive late in 1990), someone who loved backpacking and the outdoors, and who was a science fiction aficionado just like me!

He moved to Boulder in 1993, and in 1994 we were married in freefall, but that's another story. During the same time frame, J. Michael Straczynski (JMS) created the Babylon 5 universe as a television series and the new drama was first aired in January 1994. The most startling thing about the five-year-long series, to me, is that the entire story arc was conceived by Straczynski in a flash. According to that B-5 Wikipedia link above, JMS writes,


Once I had the locale, I began to populate it with characters, and sketch out directions that might be interesting. I dragged out my notes on religion, philosophy, history, sociology, psychology, science (the ones that didn't make my head explode), and started stitching together a crazy quilt pattern that eventually formed a picture. Once I had that picture in my head, once I knew what the major theme was, the rest fell into place. All at once, I saw the full five-year story in a flash, and I frantically began scribbling down notes. (1995)

The locale that JMS is talking about here is a space station set in the 23rd century, Babylon 5, populated with many alien races and with characters that I have grown to know and love as though they were family. In our first years of being married, the two of us watched the original television series in our apartment, and we looked forward to each episode with incredible anticipation. I had never seen a show like this one, and although the Star Trek series has a similar appeal, this one is deeper and more complex than anything I had seen before.

The final show, "Sleeping in Light," was first shown in November 1998, and our marriage had finally settled into something that both of us believed would continue (after a very rocky start). I still remember both of us holding hands and crying our eyes out while we watched that final episode. We watched additional TV movies and reruns of the shows for years, but that first viewing of a very special episode ending five years of struggle that resonated so deeply with our own journey, well, it was unforgettable.

Smart Guy was so taken by the series that he bought the DVD special collection, and it traveled with us in 2008 from our home in Boulder to our new home here in Bellingham. The collection sits in a special place, but we didn't take it off the shelf for years, waiting for the right time to present itself. He paid $300 for the entire set, and I see it's now half price on Amazon but still available. There is an entire website dedicated to followers of the show, "The Lurker's Guide to Babylon 5." Obviously I am not the only person who believes in its continued relevance.

Well, here it is, the middle of 2011, and today we watched "Sleeping in Light" again after revisiting all 110 episodes, once each day. I have arrived in this place where I am filled again with admiration for all the wonderful people who populate the B-5 universe, and JMS for his genius in creating this marvelous story. So many of the issues he raised are even more pertinent in today's political climate, and I feel grateful that I can look forward again, probably in a few more years, to experiencing this very special tale being told to me once again. It is bittersweet for me to realize that several of the actors have died since the show was produced in the 1990s, reminding me that time moves on, and that nothing stays the same. In fact, one of the actors, Jeff Conaway, died at the end of May, while we were watching the DVDs.

Although our life together has deepened and strengthened because of our commitment to one another, sharing something like this together as we have just done is beyond priceless. If we continue on this trajectory of love and light, I have no fear of where we will be in twenty more years.
:-)
Posted by DJan at 4:41 PM