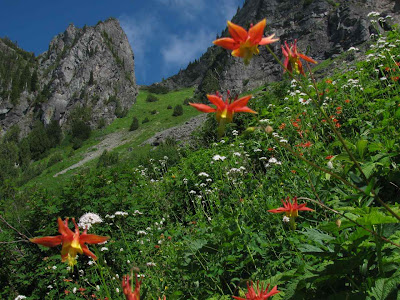 Yesterday, six of us headed up to Stujack Pass, a hike off the Mountain Loop Highway after another two-hour drive away from home. Diane and my friend Judy joined the usual four of us on our Monday adventure. None of us had been to the pass but had been given a little advice from a seasoned hiker: it is longer than the guidebooks say, and it's pretty hard. The picture above was taken on our way up from treeline to the pass, that low spot between the peaks far, far away. 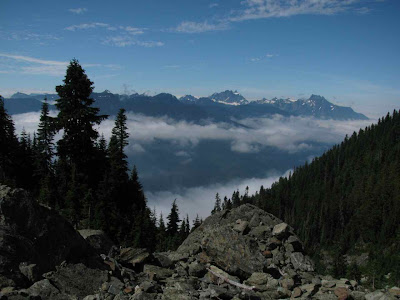 The higher we climbed, however, the more spectacular the view. The first few miles of the journey were in dense forest, so we would have been in shade in any event, but when we started we were in fog. Here you can see the remnants of the fog in the valley below. That's where we started from. It continued to clear and was completely gone from this valley by early afternoon. The flowers, however, grew more and more profuse the higher we climbed. 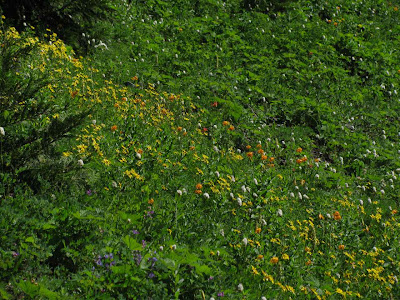 It is impossible for me to recapture the feeling I had looking at the hillsides filled with flowers. I didn't get to look at them for too long, though, since the trail was rocky and very steep. At times it took all my attention to watch every step as I trudged upward to the pass. But we did finally make it to the top at almost 6,000 feet of elevation. 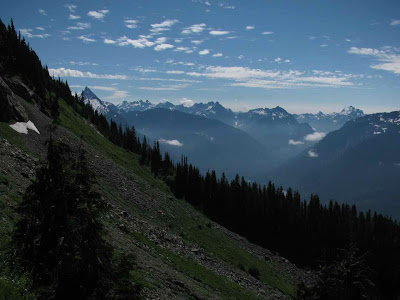 Looking back down the way we had come showed some amazing peaks, unfamiliar to me. On the left is (I think) Sloan Peak, looking like a Matterhorn from here. And then when I turned to look the other direction, I saw an old friend! 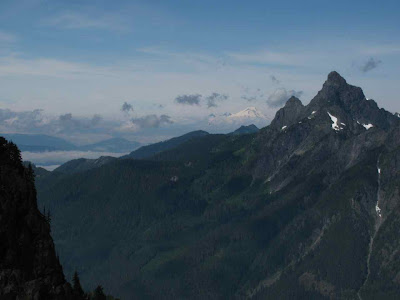 Behind the large White Chuck mountain in the foreground is Mt. Baker! And I could see that some fog was still hanging around in the valley on the left. By the time we headed back down, however, I think it had burned off everywhere. 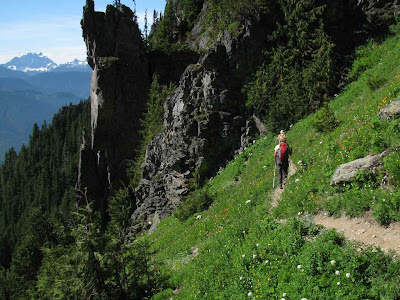 The scenery was just amazing, but we had a long way to go before reaching our cars, and the trail was just as hard going down as it was going up, requiring me to brace myself with my trekking poles to keep from slipping on the loose dirt of the trail. The hike was advertised to be around seven or eight miles from start to finish, but we all agreed (and the GPS did too) that it was more like ten or eleven miles, and 3,800 feet elevation gain and loss. A hard hike, but a beautiful one.

I went home and showered, it was really late, but I fell into bed and now the sun is coming up on the day after, and I feel pretty good, except for some residual tiredness. The entire month of August has been beautiful and filled with some incredible journeys, many of them for the first time. Labor Day is next Monday and the equinox is right around the corner, so I'm happy to have been able to make such great memories, after a slow start to the hiking season due to the snow.
:-)
Posted by DJan at 7:03 AM