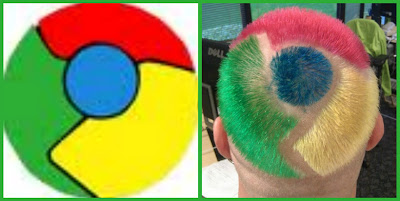 Someone on my Google+ friends put up a picture of this guy who decided to be an advertisement for Chrome. The first picture is the favicon for the Chrome browser. I use it all the time for posting, commenting, and reading stuff on line. I find that it's much less buggy than some of the other browsers, and things load a whole lot faster, too. I wish there was a way to find out what makes my posts hang, and I suspect that if I spent the time to learn more about browsers, I could.

I also use Safari occasionally, and Firefox. When I got my iPad, which comes with Safari, I downloaded something called "Atomic" hoping that it would give me better results for the platform, but no such luck. I've found that posting anything, if using my iPad, must be done in HTML mode because it doesn't support anything else. Atomic is the same. And any little window that is supposed to scroll doesn't work, which must be a function of iPad not liking Flash. Again, I could probably find all this out, but it's a really big black hole that I'm not interested in getting caught up in.

Ever since that three-day crash of Blogspot, I notice that several of my regular commenters must use the "Anonymous" button in order to comment. Since Blogspot has a really good spam filter, it usually only catches real spam, but if you do need to use Anonymous, remember to sign your name; it must look for that, since spammers always put in a live link and don't sign their comments. Frankly, when I think of all the social networks coming on line, like Google+, I wonder where we are headed in this Brave New World.

I am on Facebook and now use Google+, but I haven't ventured into Twitter or other networking sites. My brother thinks Google+ is pretty neat, and every day another person invites me to become a "friend" on there. My Facebook friend list is now over 300, but it includes skydiving friends and acquaintances, people I once worked with, family, and now people I meet in Bellingham. Oh yes, I also have quite a few friends on Facebook from the blogosphere. I really like being able to see pictures of people I no longer see in person; it reminds me that we are all changing (and aging), not just me.
:-)
Posted by DJan at 10:38 AM