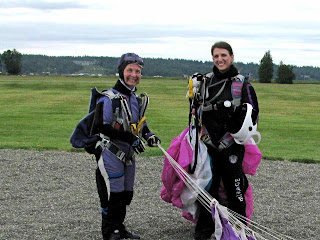 After spending Saturday and Sunday at the Drop Zone jumping out of perfectly good airplanes (a total of six jumps, three each day) mostly with these two women, Ninja Linny on the left, and Christine on the right, I am pretty darn wiped out.

You might wonder why I called Linny "Ninja," but here's why. She's only five years younger than me in years, but the stamina this woman has would wear out most people, not just me. On Saturday she made seven jumps and packed her parachute in full sun, and made another five or so on Sunday. I'm not sure, because by the time I had made three, I went home, sore and tired, with my parachute unpacked. (I just got it packed up for next weekend.) Christine told me yesterday that she would not be jumping nearly as much as she is if it weren't for Linny. This amazing woman not only works two jobs, but she never shows up at the Drop Zone without homemade goodies, usually still warm from her oven. And then she organizes skydives and rallies the jumpers (I'm one of the happy recipients). She will jump with anyone, no matter the skill level, without even the tiniest bit of recriminations when things don't go as planned. She doesn't have a competitive bone in her body, she just goes like the Energizer Bunny while the rest of us run down around her.

Today I'm in recovery mode and figure I'm probably not cut out for two solid days of hiking and then two solid days of jumping in the same week! Tired does not adequately describe it. So it's taking it easy until Thursday when I'll be out with the Senior Trailblazers again.

On another note, I received the beautiful picture I got for making a donation to Ripple on Friday. I didn't have time to post it earlier, so I'll show you now. I went to the International Bird Rescue Center and made a $10 donation and sent Kelly at ripplesketches@verizon.net the information as required, but I heard nothing back from her. Sharon Wagner, the artist whose picture I wanted, thinks Kelly is probably overwhelmed by the response, so Sharon sent me the sketch and a sweet note to me: 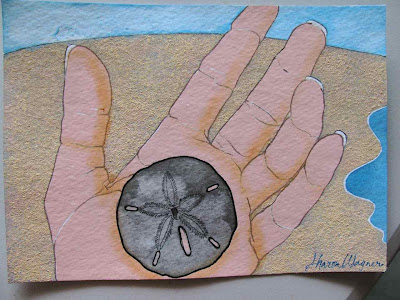 I love the black sand dollar, as it suggests the tragedy in the Gulf without showing the oil-covered wildlife that are suffering and dying. Sharon is a children's illustrator and has a wonderful blog over at Sharon's Paws Create. Check out her lovely website for more.
:-)
Posted by DJan at 12:44 PM