Four out, four up 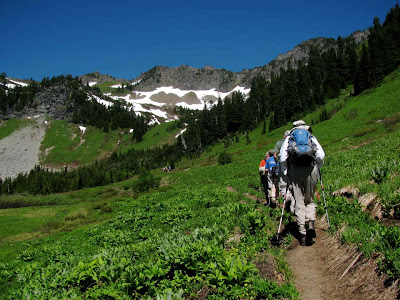 Yesterday, ten Senior Trailblazers set out for Church Mountain. Although it had only been three weeks since hiking this trail, our options are still very limited because of the snowpack around some of our favorite hikes. Plus the amount of snow that has melted in three weeks is amazing. I wasn't with them then (I was busy with the dentist), but they didn't make it this far, and you can see that the trail ahead is pretty clear of snow. We hiked up 4,000 feet and covered a little more than four miles, so that's the reason I named the post "four out and four up." (Click any picture to enlarge.) When we reached the meadow, some of us stayed behind to recuperate, as we had hiked three miles and covered almost 3,000 feet. Here's a picture of Dan sitting by the creek with Mt. Baker behind him. The rest of the group forged on ahead, and we followed them after a quick snack. The area where Dan is sitting has not been clear of snow for long, because everywhere we saw glacier lilies that crop up for a few weeks when the snow has cleared. 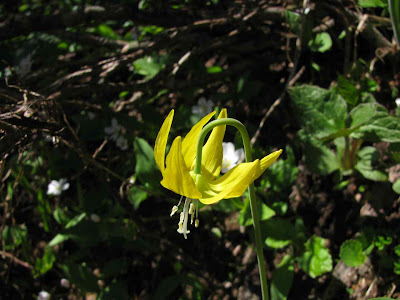 This is the first hike this summer where I saw a profusion of wildflowers: phlox, violets, columbine, and what I think are marsh marigolds. False hellibore were everywhere, and I swear they had just burst out of the ground in the last few days. (They are the green broadleaf plants in the first picture on the side of the trail.) After our rest, we followed the other hikers up the last mile. 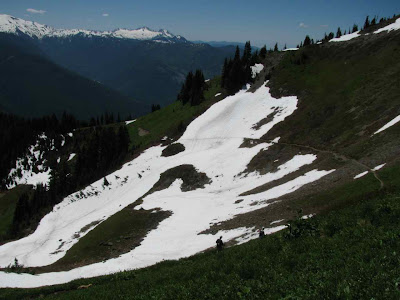 If you enlarge this picture, you can see the trail we had climbed on our way to the old lookout site. We did cross some snow, but nothing like last week. Oh, and by the way, I had no problem with heat exhaustion yesterday, as it was much cooler, and I was fortified by an electrolyte drink to be on the safe side. The last fifty feet or so of the hike are quite exposed and are really a scramble to the top. But once there, of course I had to ask Al to take my picture. 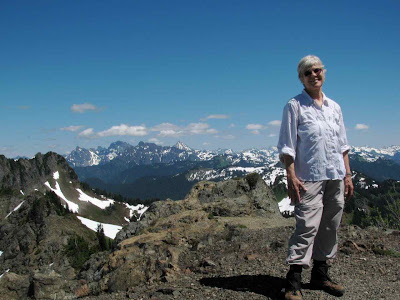 I am standing where the lookout station used to be. Thinking about how it was constructed all the way up here at 6,100 feet was a little daunting. No trace of it exists any more. After hiking back down to join our cohorts who decided not to make this summit, we then had a little more than four miles and 4,000 feet to descend to the trailhead. It was a long day, but very satisfying and just about perfect weather. A light breeze blew all day, but not enough to make us cold. And, as you can see, the view was just stupendous.

On a side note, about Phoenix, I am still grieving for his loss, but one of the people who lives down below the nest (she calls herself "boonibarb") posted this video on YouTube for us Phoenix lovers who need closure. An arborist braved the tree and got the body down in a backpack (needing both his hands to climb), and if you watch this one-minute-long video as he is lovingly removed from the pack, you can see he was already fully grown and ready to fledge. The body will be sent to a lab to see if the reason for his death can be ascertained.
:-]
Posted by DJan at 12:02 PM