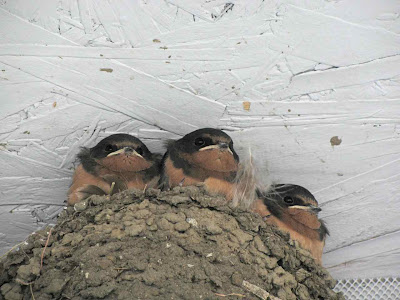 Yesterday at Skydive Snohomish, I made four really wonderful skydives. The first two were with Linny and Christine, along with Smart Guy. Somebody showed me these three little guys, barn swallows who have not yet fledged, who have a nest right above the entrance to the bathrooms. Aren't they cute? Soon they will also be in the air showing their stuff. I'll bet they would love to know about "dirt dives," but for them when they leave the nest I don't think they get to come back. It's learn to fly or die. 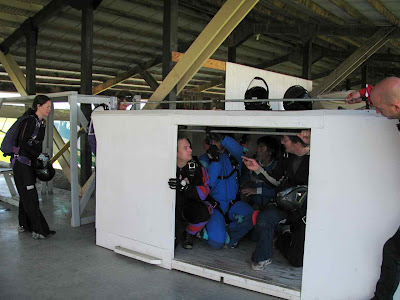 The next two skydives were a 9-way and a 10-way. When you get as many as nine or ten people paying $25 each to ride up to altitude, we like to see the skydive succeed, so we do what is called a "dirt dive." What skydivers do to help this process is to have a mock-up of the door of the Caravan, as you see here. We learn who will be in what position to create the best exit position to build the first formation as quickly as possible. Here you see the organizer telling each person when to climb out of the airplane, and those left inside the plane are gathered near the door in order to leave as little time as possible between the first and the last to exit. Remember, we only have about a minute in freefall on each skydive. 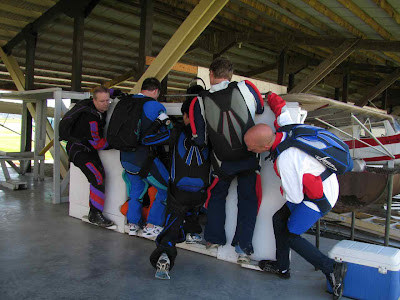 Now you can see where each person should be when the person in the middle gives the count, so we can all leave together. (That's the person with his leg out.) When the climbout begins, everyone's eyes should be on that person. And if all goes as planned, we should have minimum separation. The formation always builds from the inside out, so once the middle is complete, the others can take their position in the formation. 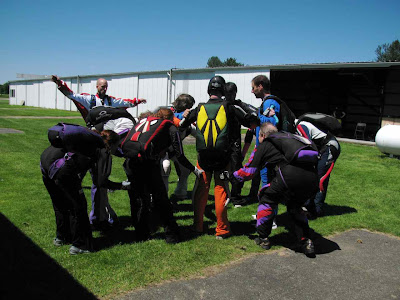 And then we run the dirt dive out onto the grass, making sure there are no traffic problems to get into your slot. Hopefully the dirt dive will help the skydive to be successful. That guy with his arms out is the camera man; you can see him in the previous picture hanging on the back of the "plane" so he can capture the exit. He has a camera mounted on his helmet that he turns on before leaving the plane.

If the dirt dive is well planned, you can imagine how much it helps the skydive to succeed. On our first one yesterday, we were able to build three different "points" (i.e., make three different formations) before it was time to break off, separate, and track off before opening our parachutes. The second one was ten people, and we made two different formations before it was time to leave.

Today I am a little sore and tired from jumping and packing my parachute four times, but it is a good tired. Ninja Linny and Christine stayed to make probably another three jumps after we left, but I knew we had a good hour and a half drive back home, and I wanted to be sure I wasn't too tired to watch the season premier of "Mad Men." After all, I DO have my priorities.
:-)
Posted by DJan at 4:50 PM