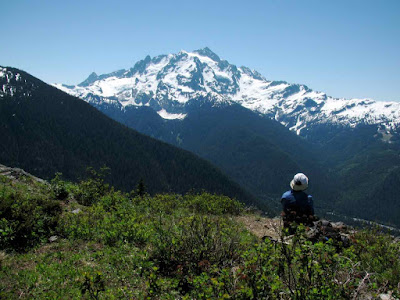 What a day we had yesterday! Another day of cloudless skies, and record high temperatures set all over the state of Washington. Nine Senior Trailblazers went up the Goat Mountain trail, after having found out on Tuesday that we should be able to get to the meadow, if not all the way to the summit, before being turned back by snow. The picture above shows yet another view of Mt. Shuksan, quite a different vantage point than on Tuesday's hike. 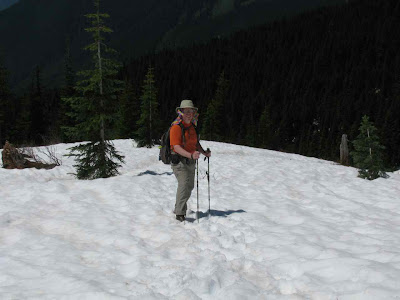 I also found out that I am not invincible, or even as young as I used to be! This picture shows Al on the snow-covered last few hundred feet up to our destination. As we were trekking up this part, I noticed that I was slowing down, feeling awful, and getting rather nauseous. The brilliant sunshine was reflecting back onto me from the snow, and sweat was just pouring out of me. I doggedly put one foot in front of the other and finally made it to the meadow.

Once we had reached our destination, a rock outcropping, it was time for lunch and we had covered almost four miles and gone up 2,700 feet of elevation. As people began to pull out their lunches and seat cushions, I drank more water and tried to pull myself together. I knew I wasn't myself when I didn't even care to take any pictures. I figured resting would help, and it did, but when I pulled out my lunch I could not eat it, I was feeling so sick. Basically I kept this to myself and snapped a few pictures. It was so beautiful up there! 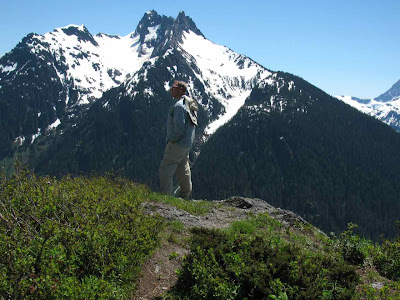 This is a mountain I don't see very often, I believe it's named Seifert, with Ward gazing around at the view (click to enlarge). After Fred and Mike took off for the actual summit of Goat Mountain, we agreed that we would stay and wait for them until 1:00pm, when we would all head back down the trail. Since the rest of the hike would be downhill, I figured I'd be just fine. But it was not to be: once we began down, I knew I wasn't feeling well at all and could not figure out what to do. Several people thought I might be dehydrated, although I was forcing water even though I wasn't thirsty.

When we stopped about halfway, I confessed to everyone how bad I was feeling, and Mike generously offered to carry my pack (along with his own!), which I gratefully accepted. Fred commented that I looked pale and kept a close eye on me. Still pouring in water, and now without my backpack, I began to feel a little better. Once we got back to the cars and I was in air-conditioned comfort in the back seat, I felt almost normal.

The first thing I did when I got home was take a shower, and then collapsed with the book I'm reading. This morning I went to the gym for my regular workout and realized that I was weak as a kitten and still have little appetite. When I got home, I looked for my symptoms on line and found this:


Heat exhaustion is a milder form of heat-related illness that can develop after several days of exposure to high temperatures and inadequate or unbalanced replacement of fluids. Those most prone to heat exhaustion are elderly people, people with high blood pressure, and people working or exercising in a hot environment.

Aha! The symptoms include heavy sweating, nausea, paleness, and tiredness. I think that this hike in full sun, so soon after Tuesday's, contributed to my condition. Now, a day later, I am feeling quite normal, although still a little weak, but I just finished a light lunch and am beginning to get my appetite back. I really don't like to think about myself as "elderly," but I guess I am, at 67; I take high blood pressure medication; and I had finished two strenuous hikes in three days in a hot environment.

So, before my blogging buddies tell me to slow down, I hear you! I will be more careful from now on, and I won't push myself so hard. I am willing to admit when I'm wrong, at least sometimes. Believe me, I won't soon forget that experience!
:-)
Posted by DJan at 12:36 PM