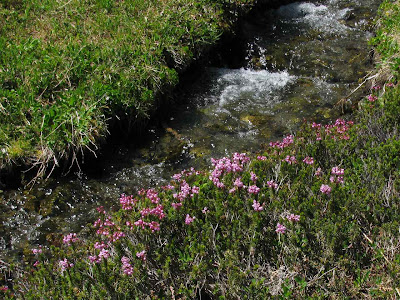 This has been another one of those tough weeks for me, with life's uncertainty again making itself known at every turn. First, I put this picture of wildflowers and creek in the meadow from last week's Church Mountain hike in here, because it makes me feel so much better when I look at this delightful scene.

Two days ago I learned that a notable scientist that I had worked with for years in Boulder, Stephen Schneider, died suddenly in an airplane while returning home from Sweden. He was 65. In that "Six Degrees of Separation" mode, I also found that Cliff Mass, whose Washington State weather blog I read daily, was one of his students and wrote a beautiful post about their relationship. Cliff was a summer student at NCAR just before I began to work there in 1979.

And then, today at the gym, I learned that an acquaintance I know from class died when he fell from a ladder. Ben and his wife Karen were regulars at the class, three times a week, and rarely missed unless they were off sailing in their boat. Another couple had missed them and wrote an email to Karen to see if everything was all right. No, it isn't. It was the talk of the class today, and I just can't believe it happened so fast. Karen's children have come to help sell their boat and house and plan to take Karen away to Portland to live with them. It's all so sudden!

It's like the beauty of life, and the fragility of our hold on it, is being driven home to me, just in case I might get complacent and forget that no one is assured another day of life, another breath even. So it makes sense to give thanks for today and let tomorrow take care of itself.

And just now I read Nancy's wonderful post about the power of prayer. I'm not sure this is a synchronous event, but it sure feels warm and welcome in my heart.
:-)
Posted by DJan at 3:28 PM