Not a drop of rain 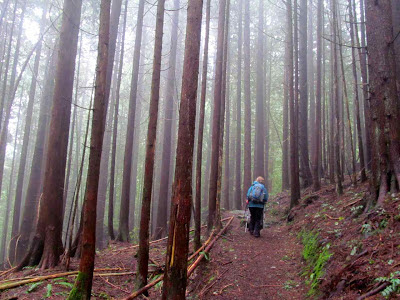 It wasn't a stunningly beautiful day, by any means, but we caught a nice dry spell in between two significant rain events, so we were very happy to have cloudy skies without so much as a drop of rain. Eight Senior Trailblazers hiked the British Army Trail on the south side of Blanchard Mountain. Why is it called that? Well, exactly a year ago we hiked this same trail, and I wrote about it and explained why it has that name here. (If you're interested, it's all in the link.) 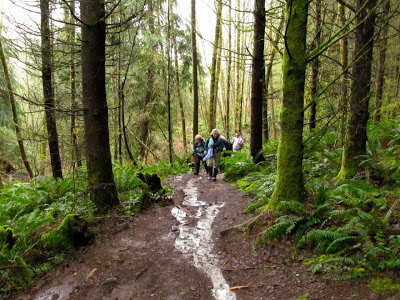 Although the trail is well marked, we had plenty of the recent rainfall running down the middle of the trail for much of the day. Soggy and a good reason to have waterproof boots and gaiters. The British Army Trail is part of the Pacific Northwest Trail system, and we spied a stash of goodies that has been strategically placed for those who are on the trail for a long time and might need a treat. 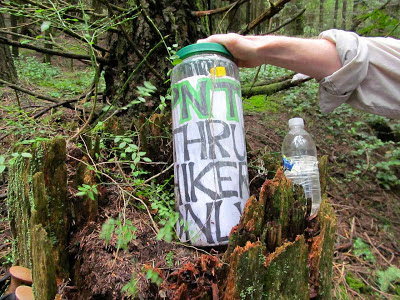 The container is filled with energy bars and even some chocolate bars. That is Al's water bottle which he put down so he could display the sign for my picture. I don't think there is any shortage of water on this trail. In fact, we ran into a place where a stream crossed our trail. You can see that the trail continues on the other side, and we decided to find another way to get across. 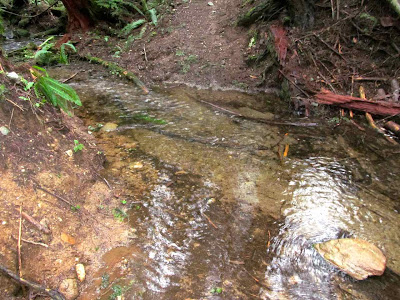 It was impossible to jump across it, and the water was flowing by with determination, just waiting to get our feet wet. We looked for another way to cross, giving us a bit of a chance to earn our "Trailblazer" moniker. We still had to leap across slippery logs and managed to keep any of us from getting wet. Plus the day was wearing on and still no rain. We were beginning to think that the forecast of a 90% chance of rain might not pan out. 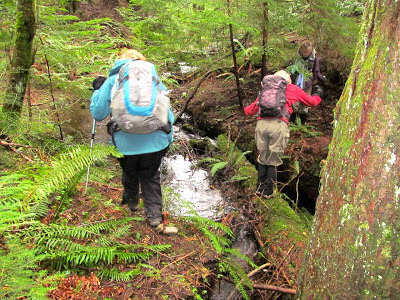 We made it to Lily and Lizard Lakes and saw plenty of signs that the beaver are happily building their dams and lodges, getting ready for the spring. Lots of gnawed and downed trees, and we saw that this side of Lily Lake is at least a foot higher than we expected it to be. Nice little dam there, beavers! 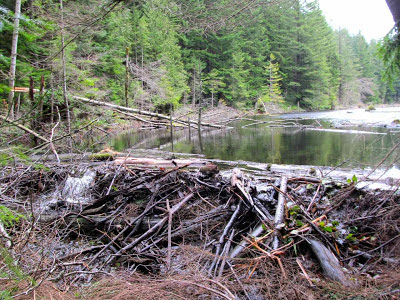 At the end of the hike, we had been invited to have hot soup, chili, and toasted cheese sandwiches at Mike and Mariam's nearby home. We walked in a bit after 1:00pm, starving, and were treated to the best cheese sandwich I've ever had. Not to mention tomato bisque soup, a nice garlic chicken and veggies, hot coffee, and Costco's famous muffins.
I guess I should have realized, after an eight-and-a-half mile hike, 1,700 feet up and down, and then a meal like that it would be hard to gather myself up and get home to write this post. It was a most wonderful day, as usual, but we don't always get to stuff ourselves with fabulous food afterwards. 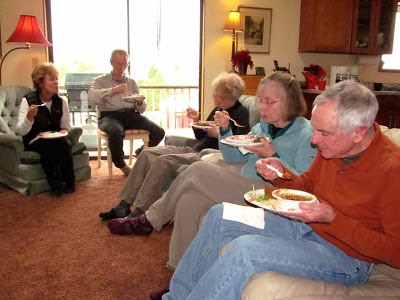 At least I wasn't alone in eating more than usual. Of course, my weight loss app reminded me that I had burned more than 1,000 calories during the day, so it wasn't going to be a problem. And then when we walked to our cars to leave, it began to rain!

As I sit here many hours later, watching the rain fall outside, I realize that I might not get as hungry as usual tonight. I won't skip dinner, though. I am way too fond of good food and good company!
:-)
Posted by DJan at 4:55 PM