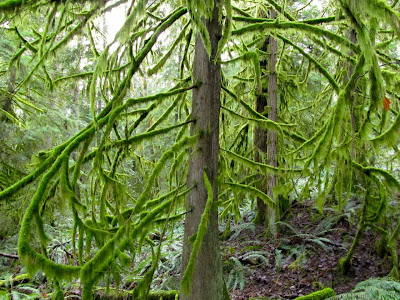 When I thought about a title for this post (which I almost always come up with while I'm actually on the hike), "Adventures in moss" seemed appropriate since we had so much green to see, but most of it was from the moss on the trees or the incredible number of huge ferns and cedars, not new spring growth. Only four of us showed up today. The sun was shining but the forecast was for rain in the afternoon. It didn't happen; it was partly sunny all day! 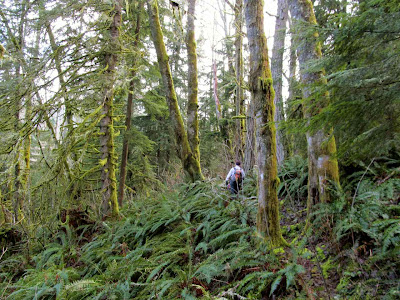 Although this Stewart Mountain hike is one of our usual winter ones, it has rarely been without quite a bit of mud. Today was no exception, but for once it was without rain. Last year we went in May, and it was very wet, as you can see here. The year before was also very muddy. Al took us on a bit of a different path today than we took last year, and although it was somewhat longer, it was much nicer. The first part was steep and dry, and the return trip was muddy and wet. 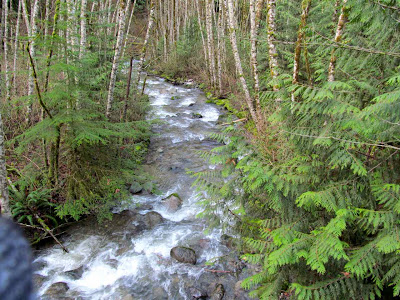 When we crossed Olsen Creek, we were hiking on a logging road and went past last year's clearcut area. Then we turned onto a very nice trail, softly carpeted with last year's leaves. As we gained altitude and had to return back to the road, we ran into snow. At least half of today's hike was on forested trail rather than road, but still. 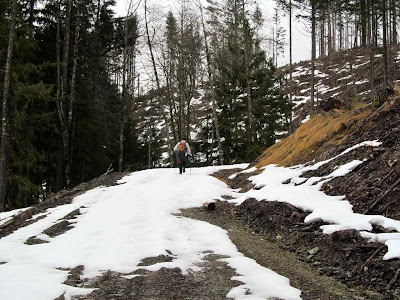 It was much colder up here, and the snow was hard and crunchy. We gained quite a lot of altitude during the almost ten miles of the hike, more than 2,500 feet to be exact. Hiking on snow takes longer and is much more difficult, but it didn't last long. We finally came to the summit and saw that it was sunny down lower, and we realized that we were in clouds that are caused simply by the mountains themselves. (These are called orographic clouds.) 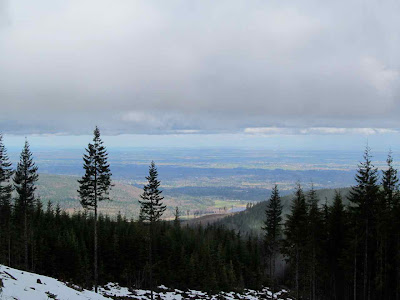 You can see that it's quite sunny down below us. Although we had the sun peek through every now and then, we also had little pellets of graupel hit us when we sat down for lunch. At first we thought it would intensify, but it passed quickly. It was the only precipitation that came out of the sky all day, so we considered ourselves rather fortunate. 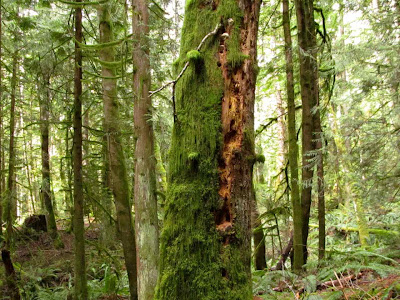 We heard many birds in the forest, and one very large woodpecker, from the sound of him. We never saw him at all, but several trees showed signs of use, such as this one, covered with moss, holes, and mushrooms. Although it no longer puts out leaves, it is still very much needed by the forest creatures. 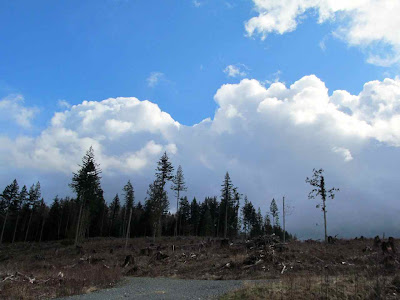 The four of us returned to our cars in full sunshine and looked back to see the clouds were still there over Stewart Mountain. According to Al's GPS, we had covered 9.9 miles, but since that isn't actually TEN, I am calling it "almost ten" to make one of my fellow hikers happy, who never rounds up, only down. That was close enough to ten that I would have fudged it!
:-)
Posted by DJan at 4:59 PM