Smart Guy took this picture as I waited to board the plane for my first jump of 2013. Since I was one week past the six-month limit for a D-licensed skydiver, the DZO (Drop Zone Owner) suggested a solo, opening high and playing around with the canopy. Smart Guy came to the DZ with me today, although he didn't bring any gear, but was intending to stick around until I got down from my first jump and then take off to explore Edmond, a nearby town. I asked him to take a few pictures, if he didn't mind (he didn't).
He took this picture after I landed, a perfect touchdown, and I was so pleased to be current again. Once a skydiver gets to a certain time limit, depending on his/her license requirements, you need to jump through a few hoops before getting out of the airplane. I was very nervous, but it was easier knowing that I didn't need to concentrate on anything in freefall except my altitude and location over the ground. Trust me, when you are used to playing in the air with friends, a solo skydive lasts a LONG time. I opened without incident and landed filled with gratitude for the opportunity I have to continue to skydive, even after having reached my 70th birthday and being a septuagenarian! 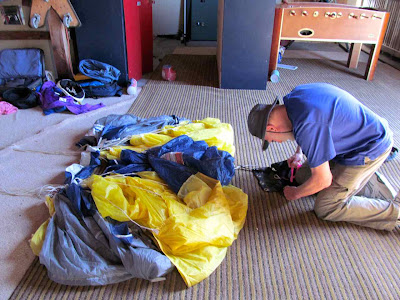 I did ask Smart Guy if he would be willing to pack for me. (He had repacked my main parachute yesterday and deemed it ready for a jump.) Yes, he was, so I went on a second skydive with my friend Cindy, who also needed to make a jump for currency. I was nervous on the second jump, but now I had company. Everything went as planned and now I am home, happy to have gotten current, and looking forward to the summer season. It has now officially started!
:-)
Posted by DJan at 5:22 PM