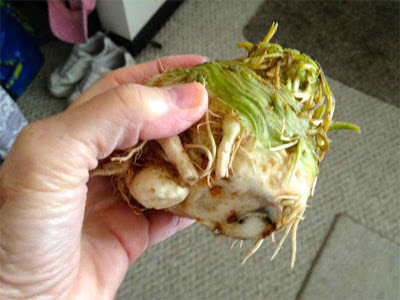 This very strange looking creature is actually celeriac, a kind of root vegetable I discovered while visiting my sister in Florida. She has access to a wonderful vegetable stand that she visits almost daily. When she would concoct her amazing salads for dinner, one of her favorite things to add is this root. Although it looks really awful, it's amazingly tasty. You can eat it raw or cooked. We had it grated and added to the salad. The flavor is faintly celery-like, but the smell! It's like nothing else I've smelled before. This one I found at my own Farmers' Market and I took the outside cover off and sliced it up for salad.

It keeps really well, and I just used up the last of it this past week, although I bought it almost two weeks ago and stuck it in the fridge. Some people call it "celery root," but if you read that link, you'll find it really isn't that at all. I also found this really interesting page, an old NPR story about "The Vegetable World's Ugly Duckling." Apparently it's not well known in this country, but I will pick one up any time I see it at the market, since I now know that it's good for me, it tastes good, and it can be eaten raw or cooked.

It has been an interesting week. Wednesday was Smart Guy's birthday, so we went to our favorite restaurant, Anthony's, for their four-course Early Bird meal. It was wonderful to feel that I've gotten enough exercise and kept the weight off that I can eat a large meal like that and not feel guilty! 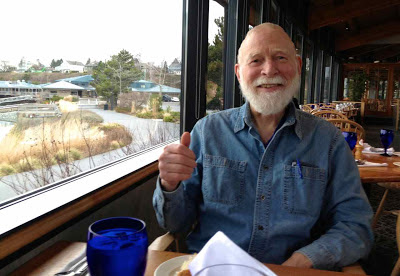 And on Friday I attended a new exercise class that made up for anything I might have indulged in earlier in the week. It's called "Swimming Boot Camp." We don't actually have to wear boots in the water, but I crawled out of the pool afterwards and realized that nobody ELSE was seventy years old in the class. I started out breathing normally while swimming, but after awhile I was coming up for air with almost every stroke.