Seven Trailblazers met to hike up Anderson Mountain on a mostly sunny day, with warmer than normal temperatures! The two white paint marks on the tree (and the sign) show this is part of the Pacific Northwest Trail system. I looked up our hike last year because I distinctly remembered lots of snow and being turned back, since there was enough snow to lose the trail. This year we got quite a bit farther on the trail, and the dates are both in late March. The link will show you the difference year to year. 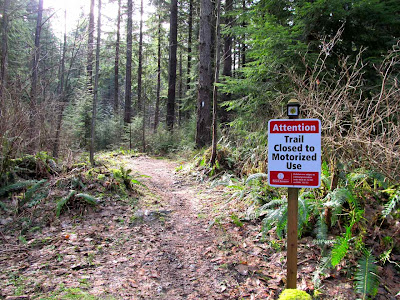 We had to hike two miles along an old logging road to get to this spot, which used to be the starting point for Anderson Mountain. But now the road is closed and we can't start here. Because of this, we don't actually get to the top any more, so we just go out until we feel like having lunch and then turn around and come back. 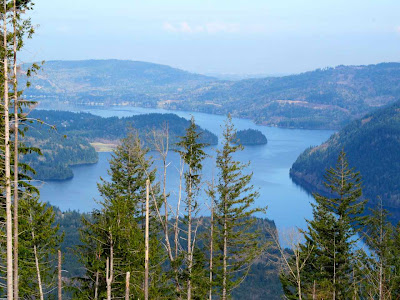 You can see the nice mostly blue skies over Lake Whatcom. I notice that I take a picture of this scene almost every year (there's one on that link from last year), but our weather was so much nicer today, with the temperature in the high fifties; it felt like spring is really here. 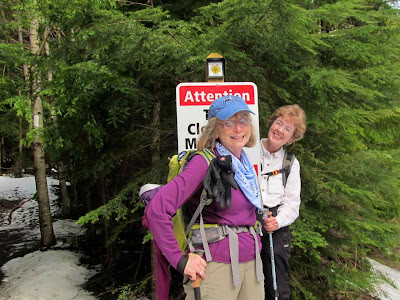 When we reached the corresponding sign about the area being closed to motorized use, we were turned back by snow. But it was almost noon by then, so we found a nice spot to have lunch and then headed back down. We covered more than 2,000 feet of elevation both up and down in about eight miles, four out and four back. 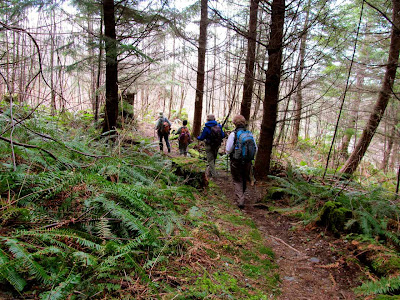 By the time we were heading back to the cars, we were singing songs and enjoying the mild temperatures. It seems Rita knows the words to a lot of songs that the rest of us know a little, so we were singing "Easter Parade" and marveling that she knows all the words and has a nice voice to boot! It was a fine day, with signs of spring everywhere. I'm glad to be home now, however, and just about ready to pour myself a nice glass of red wine.
:-)
Posted by DJan at 3:48 PM