Today the Trailblazers made our third "extra" hike of the year, a longer one than our usual Thursday hikes. We did this for the first time last August, and I thought this picture shows the amazing difference we saw today, versus the frozen lake we encountered last year. 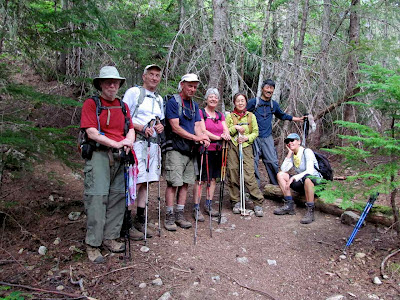 Eight of us headed up to Highway 20 to begin our hike. It was an exciting trip to the trailhead, as the very steep road had recently been reconditioned, and we spun our wheels, all eight of us in Mike and April's Honda Odyssey. We had to get out and let him gain a running start to get up the hardest and steepest part of the rough road, but we made it with no further excitement. We saw only a few other cars at the trailhead. 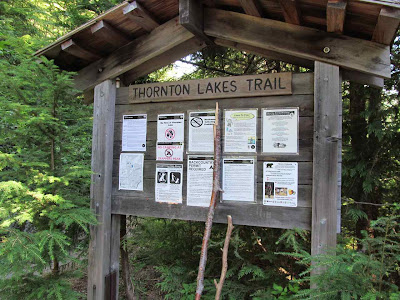 The trail starts out very mild, with a gentle grade for the first two-and-a-half miles. And then... it begins to ascend up steep switchbacks on a fairly obvious trail. We decided we would like to attempt to make it up to Trapper Peak, which is another thousand feet after we get to the place you see in the first two pictures. We split into two groups, one faster than the other. I stayed behind with the slower group because in the sunshine and warm temperatures, I simply could not go any faster. I made it partly up past the junction to the peak, but I was not feeling all that well, pushing harder than I was comfortable with. I was not alone. 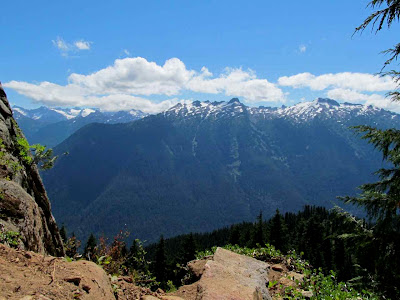 This is the view from the highest point I gained, and I was still 600-700 feet below the summit of Trapper Peak. Three people went on up, while the rest of us headed back down to the overlook of Thornton Lake. We had lunch and I recovered somewhat. I tried hard to get a picture of our fellow hikers on the summit, and while we could spy their movement now and then, they were too far away to get a good shot. 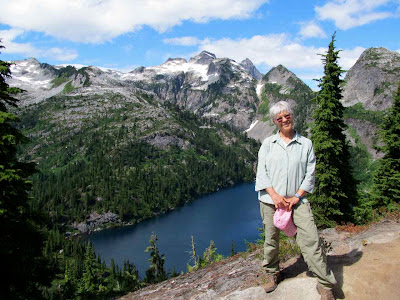 It was a lovely day after all, since I didn't try to make it to the summit (seen on the right-hand side of this picture). I hiked ten miles and ascended and descended more than 3,000 feet. The summiteers had even more distance and elevation. Once we were all together again, we hiked back down to the car and made it to the Marblemount Diner for a wonderful meal before heading back to Bellingham. It's been a long day, more than twelve hours, and since I had a glass of wine with my dinner I'm skipping a second one as I write this. Now for a nice shower and getting horizontal with a good book until sleep overtakes me.
:-)
Posted by DJan at 8:45 PM