Almost too good to bear 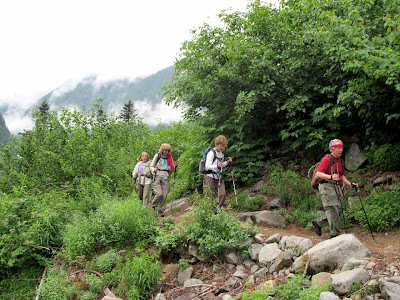 What a day! Six Senior Trailblazers started up to hike the Keep Cool trail and decided, once we saw it had been raining during the night and early morning, to change our destination to Hannegan Pass, since it's more open and has better footing. The change was serendipitous, to say the least. The clouds were low, as you can see here, and it was on the cool side. This hike can be very uncomfortable in full sun, but we started out with a nice cloud cover and no rain. We didn't know how high we would get before running into snow, but we decided to give ourselves a chance to at least reach the pass. 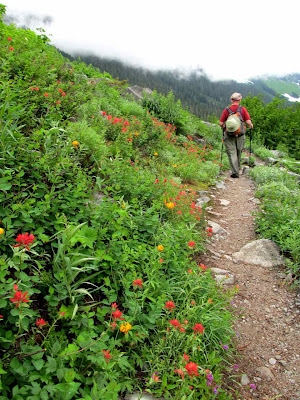 I was amazed by the profusion of summer flowers: lots of Indian paintbrush, tiger lilies, lupine, penstemon, thistles, and more. We hiked in relative comfort as we gained altitude, and the snow was amazingly absent until just before Hannegan Pass. Last year, we went up to the pass on August 11 and there was much more snow, as you can see here. However, there was still a bit of snow today.
Once we gained the pass, we thought it might be fun to head up toward the peak, without having any idea that we might actually go that far, considering the time factor and the snow. We noticed, however, as we headed upwards, that the skies actually began to clear. 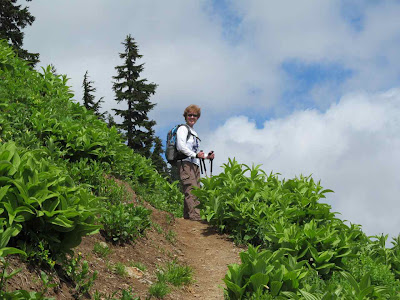 Peggy looks like she's standing on the edge of the world. Doesn't it feel like it's getting warmer? Yes, it was. The blue skies continued to come and go, and the view just got better and better. 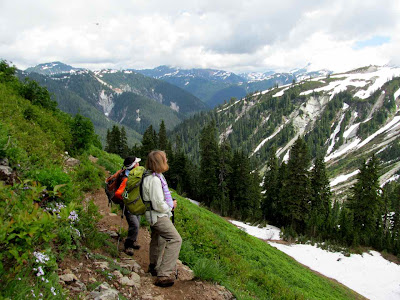 Considering our low expectations for the day, thinking we would have low clouds, little view, and perhaps a bit of rain, as the day went on we got more and more excited and had some trouble making ourselves turn around and head back down. Get a load of this scene with glacier lilies. Remember they don't last long, just a few days or a week after the snow melts. 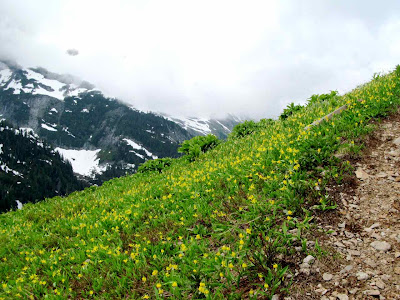 We finally did decide to head down, after we had covered almost five miles, meaning that we would have an almost ten-mile day. I asked Al to take a picture of this week's contingent of female Trailblazers, and he did. I offer you this to show that we were all having the time of our lives.
And then, on our way down, we heard from some other hikers that a BEAR had been sighted just below us, and to keep our eyes out for him. Someone knew it was an adult male, and sure enough, we saw him! 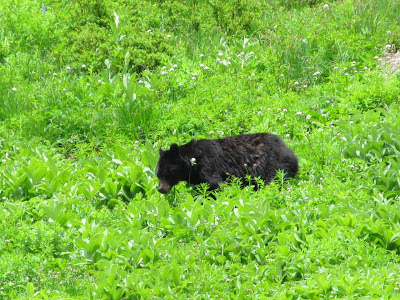 Yes, there he was, snacking away on whatever it is that bears eat. He saw us, I'm sure, but he was unconcerned as he continued making his way through the open field. I was thrilled to get this picture. After a short while we decided that maybe we should tiptoe away (he was about 75 yards away from us and looks closer through my telephoto). As we headed back down to our cars, the skies continued to clear, and we got a wonderful view of Ruth Mountain. 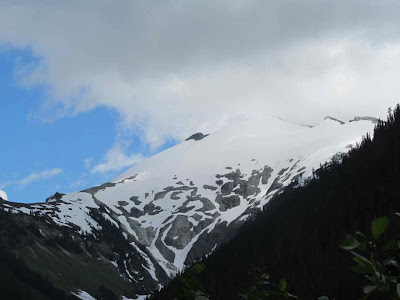 It was one of the best days I've had (I know I'm saying that a lot lately), but it's true. We didn't think today's hike would be one that we will remember forever. It was. We covered almost ten miles and 2,600 feet up and down. Sometimes when your expectations are lowered, and you go anyway, you end up with a day that is, well, almost too good to BEAR!
:-)
Posted by DJan at 7:14 PM