Although we haven't had much of a summer yet, the wildflowers are just now coming into their peak weeks in the High Country. Last year we had spring and summer wildflowers all come out at once, since the snow didn't leave until very late in July and early August. Any spring flowers that had a chance to flower had to wait until then, and all the summer flowers came out at the same time. We had an abundance of wildflowers well into October. I look forward to this year's crop. Here's where we stand at the beginning of August. 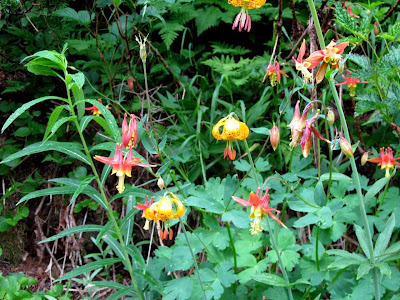 Last Thursday I captured this picture of red columbine mixed with tiger lilies on the trail up to Hannegan Pass. They were right there on the side of the trail as I plodded uphill with my nose toward the ground, not wanting to slip and fall on the rocks. Which of course I did anyway, but I waited until I was on the way back down. My knee and right leg are still a bit banged up. Here's a closeup of that pretty tiger lily in the middle: 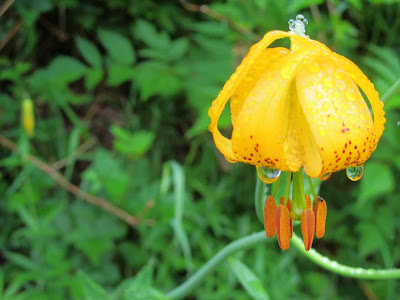 When I looked at this closeup as I downloaded my pictures at home, the two drops of water looked a little like bug eyes on an extraterrestrial creature. It had rained that morning but by the time we started our hike the temperature was perfect, although the humidity was on the high side. Then the sun came out, and we marveled at the raindrops on these grasses. 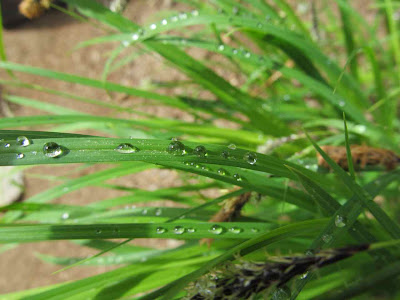 They looked like little diamonds perfectly placed on the blades of grass. Although this is not technically a picture of a wildflower, I think it deserves to be appreciated by as many observers as possible. Not too many people appreciate thistles, either, but I thought this batch of pretty pink thistles deserves to be admired as well. One person's weed... 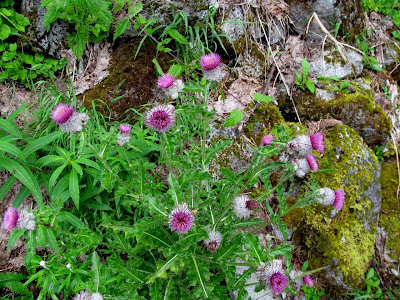 Finally, we saw little patches of phlox by the side of the trail, sparkling in the sunlight and delighting us with their beauty. Phlox is usually in abundance in the High Country in late summer, and finding this patch in early August reminded me that summer is not only incredibly beautiful in the Pacific Northwest, it is also fleeting. 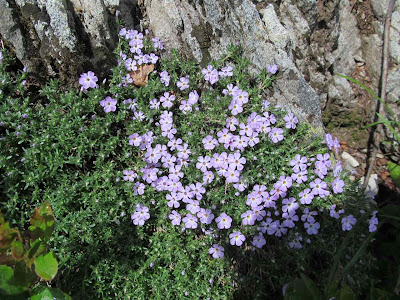 I read the other day that once we reach August 2 (when the majority of these pictures were taken), we begin to travel toward the fall weather, meaning we are not likely to have another heat wave like we experienced last week. The joke I heard to illustrate the brevity of our summer weather: one visitor to Seattle asked a native about what we usually do here in summer, and the native replied that if it falls on a Sunday, we go on a picnic!
:-)
Posted by DJan at 2:12 PM