Another great day at the DZ

Another great day at the Drop Zone yesterday! I didn't write a post on Saturday because by the time I got home at 5:30pm I was ready to drop. I know that Linny can make twice as many jumps in a day as we did yesterday, but I can't. She is only five years younger than me, but she's got more than twice my stamina. She had to leave at 3:30pm to go to her second job, probably worked past midnight while I was snoozing away in my bed. She's simply amazing. Whenever we land from a good jump, that's the word she always says as her feet touch down: "Amazing!" 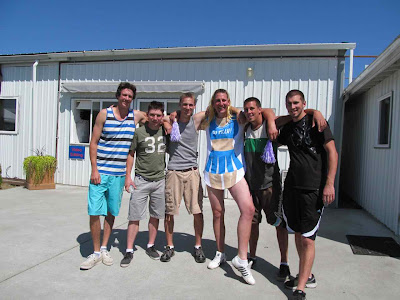 As we were waiting to load the plane for one of our jumps, we commented on the cute outfit on this young man. I went over to investigate. It turns out that his friends gave him a bachelor party, and part of the event included taking him to the Drop Zone in costume as a cheerleader, where they would all make tandem jumps together. They were quite amenable to me taking their picture, and I was on the ground when they came in under canopy. I knew it had to be them because they were making quite a ruckus. I ran out to the landing area and got this picture after their jump. 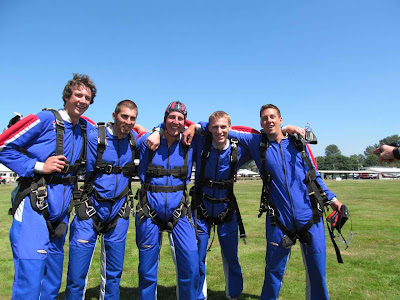 The "cheerleader" is the one in the middle. They were all bouncing with the exuberance that only comes from men that young, and they were quick to get the guy back into costume after the removal of their jumpsuits. I waved goodbye to them as they left, all thrilled to have made their very first skydives (and probably their only ones).

All in all, it was a great day playing in the sunshine. As you can see, their wasn't a cloud in the sky, the temperature was in the mid-seventies, and a light breeze assisted our landings. Couldn't have had a much better day. I'm ready to take it easy today, since tomorrow I'll be heading back south with my Trailblazer friends to climb Mt. Dickerman, a fairly hard hike. You know I'll be taking pictures!
:-)
Posted by DJan at 6:45 AM