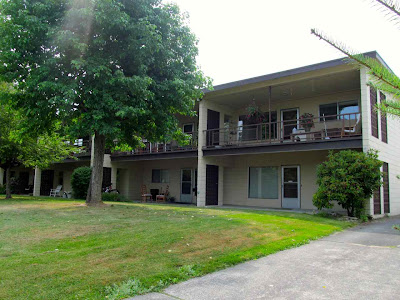 Our plans to move from the southernmost apartment in this complex to this one, the northernmost unit, are coming along. The previous tenant is moving his couches and furniture (he has three couches, one on the porch and two in the living room) and will be out by the end of August. He said he hopes it will be by the 27th, which is next Monday. But the manager said he needs to get in there and check it all out before he can give me a date. That's all right, as I've been taking the time to get things cleaned up around here. 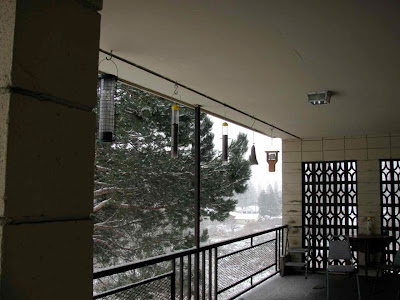 This is a picture of our front porch, taken last winter when I was feeding the birds in earnest. As you can see, five feeders hang by hooks for the birds to enjoy a steady food source during the lean months, when it's cold and the pickings are very slim. I tried last summer to stop feeding them, but I was unable to let myself think of them not coming to visit me. The very best time to stop feeding birds is after they've had their babies and there is an abundance of food sources. So, this summer the move has forced me to finally do it. I'll miss seeing scenes like this: 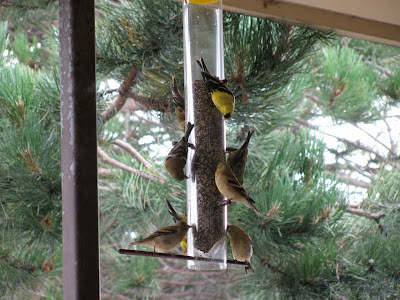 The picture was taken in the summer; you can tell by the brilliant colors of the male goldfinch (the top one in front, for example). I've learned many things during these years of birdwatching. I managed to establish a place that many goldfinch congregate. They are still around, although not on my porch in such abundance. Other tenants also feed the birds, so I will still see them. The chickadees and nuthatches are attracted to the suet feeders, and I'll continue to keep those on my new front porch.

The one thing I won't miss at all are the squirrels. They wouldn't stay away, always hoping to get a handout from the stuff dropped on the porch by the birds. They couldn't get to the feeders, although they were absolutely ingenious in their attempts. The overhang of the porch made it very difficult, so they spent their time going around to find what had dropped to the floor. 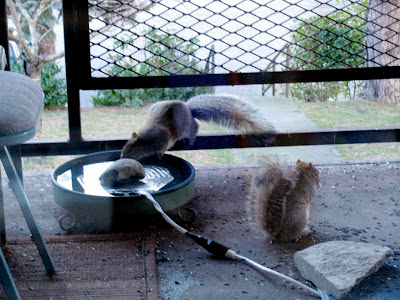 Cleaning bird droppings from the past four years has not been a lot of fun, but it's a necessary part of my duties as a tenant. It's been days and I'm now almost finished with the porch. We've got another week or ten days before we can actually move, and I'm hoping to have the majority of the cleaning done. Everything else will be in boxes and moved across thirteen apartments to our new abode.

Probably the very best part of the move has been getting rid of what I've accumulated in the last four-plus years. The clothes I brought from Boulder that have not been worn, books I won't read again, and various other parts of my past that don't need to come into the future: they've all been passed along. It's amazing how much more mobile I feel. And! The next very best part: I'm getting to keep the garden I tended all summer long!
:-)
Posted by DJan at 4:39 PM