I saw this bumper sticker on cars a couple of times around town and looked it up on the Internet. I found that it is sold on a website called Peacemonger.org, with an interesting outlook (from their Vision page):


Our vision is of a creative collaborative outreach network that will combine artists and activists on a collision course with peace. We promote peace and social justice issues while advocating and fund raising for a broad spectrum of charitable institutions.

What struck me about the sticker is the inclusion of many aspects of various people's belief systems in one simple design. I love it and find it very heartening. I'm not a bumper sticker kind of person any more (I used to be), but I think perhaps a magnetic sticker that can be removed without damage to my car might work just fine. Coexistence, to me, is a fact of life, but honoring many belief systems without making any value judgments seems like a very worthwhile goal. 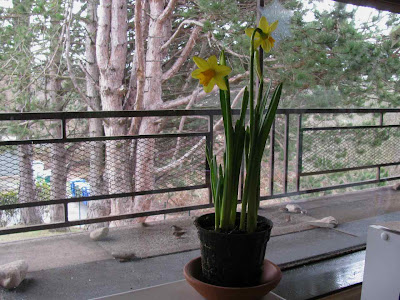 Right now I am also wanting some signs of spring, especially after having read my blogging friend Linda's beautiful "walk through a winter garden." She lives down south in Seattle and has posted several pictures on her blog of her amazing back yard. I have purchased some daffodils and placed them on the corner of my desk, where I can watch them grow and change, watch my birds, and enjoy the pine tree. The window faces east so the tree catches the light at sunset when the grey skies lift. At first I considered buying a bouquet of cut daffodils, but these early daffys grown from bulbs seemed much more appropriate for contemplation. I am learning to coexist with the rain.

Tomorrow I go to see my new doctor and will miss my usual workout. I warned the instructor so she wouldn't worry about my whereabouts. I am such a regular that I'm missed when I don't show up. Last Monday when I went showshoeing, she asked me on Wednesday if I had missed the bus. It's nice to be missed, I find. I had to leave my previous doctor at the Center for Senior Health because they dropped my insurance coverage, and this new medical center is much less restrictive in what insurance they take. The only old thing about my new doctor is his last name: Dr. Whitehead. He's only been practicing medicine for four years and looks awfully young to my senior eyes. I tell myself that he will be up on all the latest, and I am predisposed to like him. I'll let you know how it goes.

I went to see The King's Speech a second time yesterday, this time with Smart Guy. It's interesting how much more I saw this time, and for some reason I was much more emotional and wished I had brought my hankie so I could wipe my eyes a bit better. Maybe it was because I had read up on King George VI and found that the movie followed actual history quite closely. As you might know, the movie is about Prince Albert who was forced to take the British throne just before World War II broke out. He had a debilitating stammer that caused him great distress, since he was expected to address his people through radio broadcasts. He spent many years working with Lionel Logue, a speech therapist who treated him with then-controversial methods. From this Wikipedia link:


In 1911 Logue set out on a tour of the world to study methods of public speaking. Following his return to Perth, and after the Great War, he developed treatments for war veterans whose exposure to shell-shock had left them with impaired speech. In addition to physical exercises, which helped with patients' breathing, Logue's distinctive therapy emphasized humour, patience and 'superhuman sympathy.'

As you may already know, Colin Firth won a Golden Globe for his performance as King George, and Geoffrey Rush (who played Logue) was nominated for Best Supporting Actor, although he didn't win. It is a most satisfying movie, and that link to the movie (from Rotten Tomatoes) shows that both the critics and the audience agreed, giving it a 96% "freshness" rating. If you see it, I hope this true story might inspire you as it did me.
:-)
Posted by DJan at 1:41 PM