The snow, I mean. I awoke yesterday morning, Sunday, and saw out my bedroom window that the snow was falling quite heavily. I grabbed my camera so I could take some pictures before the sun had even come up. The flash caused the snowflakes to stand out, but you can see on the upper tree branches that we had at least a couple of inches overnight. After deciding to forgo my usual trip to the Co-op for a latte and a paper to bring home, Smart Guy and I decided to take a walk to the beach to look at our transformed scenery. 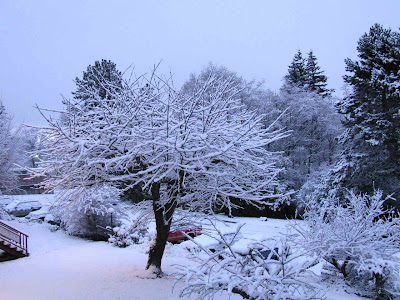 Before we even left the front porch, I took this picture of our beautiful apple tree that carries white blossoms in the spring. It looks something like this, but in a way, this was even more ethereal, as well as more transient. Once the wind came up later in the day, all the snow was blown away. It looks like it could be a black-and-white picture except for the red car. 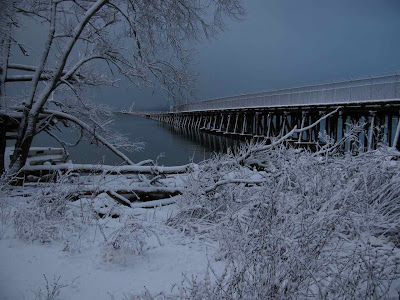 This picture shows the snow and the dock at Squalicum Beach in Bellingham Bay. I debated about lightening it up a little, as the overcast skies and the steel-grey water added little contrast to the white snow, but I decided it was more dramatic just like this. In iPhoto, I can mess with the pictures quite a lot, getting effects to help with the point-and-shoot limitations of my camera. 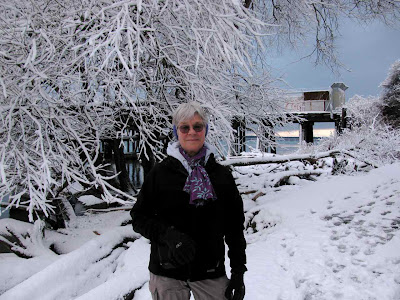 I used the "enhance" feature to lighten this picture of me taken by Smart Guy. You can see under the dock the beginnings of the clearing sky, and by mid-day it was completely blue. By then the wind had come up, however, and changed the magical look of the trees to their usual mundane bare winter branches. On the way back, our downstairs neighbor suggested I take a look at the circular clothesline in the back yard to capture the amazing effect of the snow: 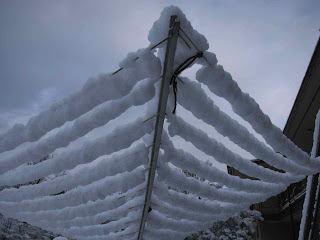 It almost looks like the prow of a ship, to me. The clotheslines are there for the use of the residents, and some people take advantage of them during the summer, but there weren't any takers today. Except me, that is, who used it to nab a great shot!

Oh, and just for grins, I wonder how many of my readers have ever heard of the word "forwent." When I was getting ready to use the word "forgo" in the first paragraph, I wasn't sure whether there is an "e" after "for" so in looking it up, I discovered the following:


forgo |fôrˈgō| (also forego)
verb ( forgoes ; past forwent ; past part. forgone ) [ trans. ]
omit or decline to take (something pleasant or valuable); go without : she wanted to forgo the dessert and leave while they could.
• refrain from : we forgo any comparison between the two men.
ORIGIN Old English forgān (see for- , go 1 ).
Well, you learn something every day! I have used the verb form AND the past participle, but I have never even heard of "forwent" before today.
:-)
Posted by DJan at 1:10 PM