I tried to download this new header onto my blog yesterday, and after getting entirely frustrated with trying to download it properly (it showed up all pixelated and the wrong size), I decided to download my previous header (the one that SHOULD be there now). I went to the "Help" button and put in a query and was directed to this thread, which shows that there is something wrong with the header widget and it has been going on since last Thursday!! They have a whole lot of very unhappy people, but one of them suggested that I find my previous banner in Picasa (which has all of my pictures downloaded from this blog) and link the URL instead of a picture, and it worked. I just checked a few minutes ago, and the issue is still not fixed and several people are heading over to Wordpress in disgust.

Besides not wanting to start over, I will wait patiently until the problem is fixed before trying to put another picture in my header. It was fun to put that header together but now I've decided it's too big and so I'll work on another -- and wait for the fix. Hopefully if you want to change your header picture you will decide also to wait before going through all the frustration that hundreds of us have dealt with in the last few days.

Just a quick update on the calorie counting front: today after my workout I weighed myself on the same scale and have lost an apparent two pounds. Now, I know from previous efforts that the first few pounds are the easiest to lose, and they may not be gone at all, actually. Water weight fluctuations cause changes that appear to be actual weight loss, but it sure made me happy. I know that last night I woke up and realized I was hungry. According to Calorie Count, I was 300 calories short of what I need to maintain my weight (1500 calories taken in), and it surprised me to be hungry at all. I figure I must have been eating at least 2000 calories a day before this effort began, and that caused the imperceptible creep upwards. Imperceptible a day at a time, that is. 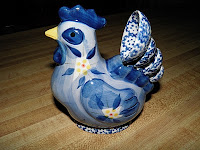 My friend Rae over at Weather Vane is hosting an unofficial giveaway and has asked anyone who might be interested in winning this cute little spoon holder (or a couple of other prizes) to link to her post in order to be officially entered in this unofficial prize party. Although she didn't mention what the other prizes are, I am intrigued by this fun event and don't want to be left out. I have already won a key chain from SquirrelQueen at The Road to Here and use it every day. (It has a picture of the Walla Walla Sweetie Onion on it.)

The blogosphere is expanding for me. I have reluctantly begun to follow another four blogs just this past week, and I see that I recently stopped being in the double digits in followers by gaining my 100th follower. (This might be different if you look over at the sidebar, because people come and go, as most of you already know.) It made me smile to see that "99" turn to "100" for no reason I can surmise, except that I know I am not the ONLY one who spends a huge amount of time reading the blog posts of her virtual community. It's time consuming, but it's also really fun.
:-)
Posted by DJan at 1:08 PM