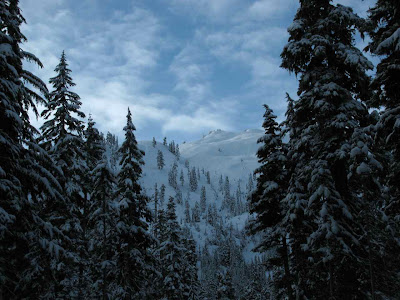 We had such a great time last Monday on our snowshoe outing that our fearless leader Al suggested another one, to the same place, today (Tuesday of the following week) to take advantage of the snow that has fallen since then AND to beat the next storm on its way here tonight. I took the above picture from the car on our way up to the ski area, and we were almost there. We were joined by four neophytes who have NEVER before been on snowshoes, all of them Senior Trailblazers. Peggy told me she had an anxiety dream about it but it was really a wonderful day, although nothing like last week's sunny and warm trip.
The wind was blowing and it was much colder as we headed up Cardiac Hill. Thirteen of us left the parking lot and began our hike. Since there was a lot of new snow, we had really wonderful conditions, even if we were nowhere near as comfy as last week. My hands and feet were cold for the first hour, gradually warming up from the exertion. However, every time we found ourselves with a brisk headwind, my body temperature went down and I felt the cold again. As we gained some altitude, the scenery was spectacular and completely different from last week's trip. 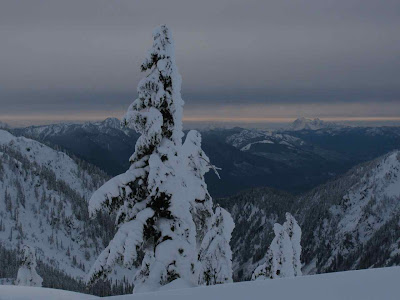 You can see all the new snow, as well as the lowering skies. We had no view of Mt. Baker today, and when it got to be noon-ish, we headed down off the ridge to get out of the wind and have a quick snack. My Camelbak water hose had frozen solid and no amount of sucking and blowing would dislodge it. I've simply GOT to get a better system. Fortunately I had brought some hot tea in a thermos, so I drank some and ate part of a sandwich before we headed back down to the stream bed on our way back to the cars. We ended up hiking around three-and-a-half miles, which we consider equates to regular hiking to be about two to one (in other words, it felt much more like seven miles without snowshoes). 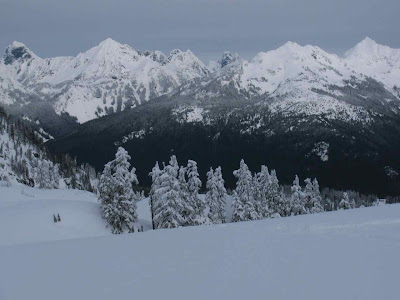 The view of our favorite mountains was spectacular, even if the sun was hiding behind grey skies and the wind was blowing. After we reached our cars, Mikey Poppins discovered that his car keys were missing, probably falling out of his pocket in a snowdrift after a spill. We all fell at least once, but this one caused us some consternation. After loading everyone up in our cars, we decided to take a look at our options at the Beer Shrine and discuss how to fix the problem, leaving Mike's car in the parking lot. Here's Mikey, dressed appropriately for once, in front of the Beer Shrine's sign. 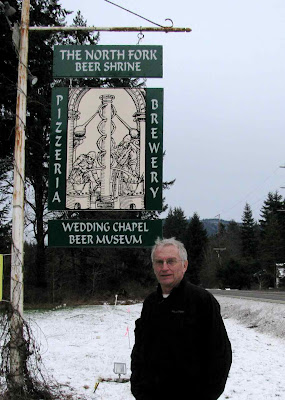 Yes, it's not only a brewery and pizzeria, but also a wedding chapel and beer museum. They have their own microbrew, and I can attest to the excellence of their IPA. We had a quick conference at the Shrine, and the drivers amongst us only had the smallest three-ounce repast (I was not one of them) while we decided that Mike's wife would drive a key to our meeting point and Al (blessed guy that he is) would then drive Mike back up the mountain to his car, while the rest of us all came home to our various spouses. As I am writing this right now, at 5:30pm, I suspect that Al and Mike are still not home from the day's adventure. As bad as Mike felt about it all, I hope he realized it could have happened to any one of us. It was a GREAT DAY filled with excitement and adventure! 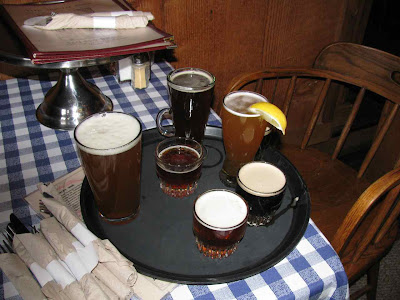 Trust me, if you ever get a chance to experience the North Fork Beer Shrine's wonderful microbrewery, you will not be sorry. Until next time, stay safe and have fun! I know I am.
:-)
Posted by DJan at 5:34 PM