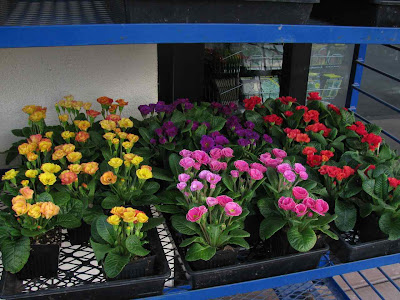 On the way into the Community Food Co-op this morning, I saw these beautiful primroses for sale, two 4" flats of primroses for $3. They are so lovely and made me realize that spring really is just around the corner. Okay, maybe not exactly that soon, but the days are now beginning to lengthen enough for me to see the sun come up when I walk to the bus, and in the evening the sun sets at almost 5:00 pm, instead of 4:14 (at the solstice). It's enough to make me smile and feel happy when the sun comes out to play.

Today, though, I was walking to the bus in grey fog, just before sunrise, with my gloves, hat, coat all making me feel nice and warm, plus it wasn't raining for a change. And what should I spy heading down the gentle slope of the road but a teenager in shorts, t-shirt flying, on a skateboard! He was obviously on his way to school, but I was struck by the disparity in our gear: he didn't have a hat, coat, or gloves and didn't seem to miss them. The temperature was 45 degrees F, not terribly cold, but not exactly t-shirt weather to me. A sign of spring coming, I'd say.

When I lived in Boulder and the sunshine was just a given most of the time, I didn't appreciate it nearly as much as I do now, after several days of rain and overcast skies. Right now the sun is shining brilliantly, the birds are busily foraging on the front porch under the feeders, and my spirits are pretty darn high. Although when I went to get the ultrasound yesterday that took a look at the condition of my carotid arteries, I was given some good news and some not-so-good news. While the arteries are not exactly pristine, they are not blocked more than ten or twenty percent, according to the technician. Nothing to be concerned about. However, he saw an anomaly on the left side of my thyroid: a pea-sized lump or nodule. He showed me the ultrasound picture and we discussed its implication. He told me that I should expect a call from my doctor ordering some blood work to find detailed information about the functioning of my thyroid. After that, I might expect a biopsy if the doctor wants to rule out cancer.

I wasn't exactly surprised when he told me about it, because for several months now I felt something in my neck when I looked down and to the left. I thought it might be a swollen gland. Of course as soon as I got home I hit the Internet and discovered that thyroid nodules are fairly common and are more prevalent with age. Around 95% of them are benign. So now I will find out if my new doctor is really on the ball and what he decides to do with this information. I'll be letting you know.

I had decided not to mention it here on my blog, but it has occupied enough of my attention that I really couldn't skip it without doing some mental gymnastics. I feel a bit of relief now that I've written about it. And since I had broken the two-pound barrier, I stepped on the scales again today, wondering if it would still show that they are gone, and it registered another half-pound lost! With the sun shining and expected to continue through our hike tomorrow, my weight loss going in the right direction, and spring flowers smiling at me, life is pretty darn good!
:-)
Posted by DJan at 1:01 PM