I got up early (even for me) to dress and quietly tiptoe outside to see if I could view this morning's lunar eclipse. The moon was full here on the west coast and the eclipse was complete at just about 5:58am. I thought about going out to Bellingham Bay to see if I might capture a dramatic shot or two, but when I walked outside, the clouds and fog told me I wouldn't get much of a shot, if anything at all. And then the clouds parted as I stood on my back porch, the moon appeared in the sky, almost completely eclipsed. Although I took several shots, none of them were good, since in the dark at full zoom I couldn't hold the camera steady enough. But I watched as the last of the light left the moon, and I gazed at it in wonder. The clouds closed up and covered the moon again. It was as if the sky opened up just long enough for me to glimpse it. 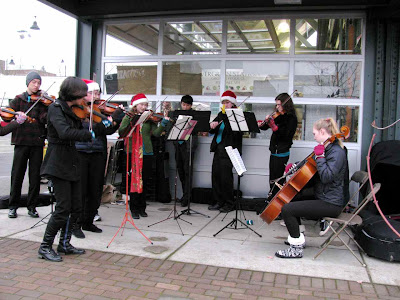 After a nice walk with my usual walking group this morning, I headed over to the Farmers' Market, looking for scenes that would illustrate the season. We only have one more weekend before the Market closes until April of next year. The much-smaller Market was serenaded today by these young musicians. They had just started to play and laughed at their efforts with frozen fingers. The music was so beautiful, though, it brought tears to my eyes. If they made mistakes, I never heard them. 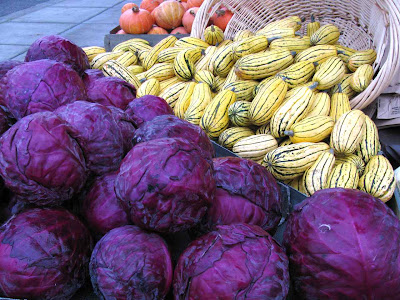 Since there are still plenty of vegetables, I stocked up before heading over to the Y. For some reason, I just couldn't get myself excited about swimming, so I halfheartedly used a couple of the weight machines, took a shower and went home. I like the bicep curl machine and the one called "lat pull-down." Both of them give me a nice "pump" with just a little effort, and since it IS the middle of December, I decided I deserved to bring my veggies home and stay warm and snug in my little corner of the universe for the rest of the day. 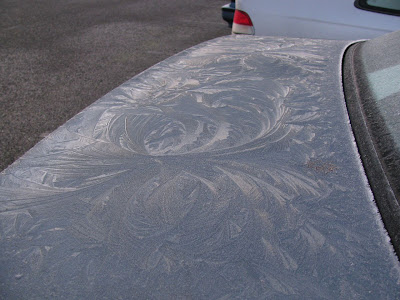 I took this picture of my car the other day when the sun was just coming up. (We haven't seen the sun today and aren't likely to.) I thought the patterns in the frost were just beautiful. Smart Guy said the shapes remind him of coronas from the sun. To me, they look like tapestry. Isn't Nature amazing?
:-)
Posted by DJan at 2:30 PM