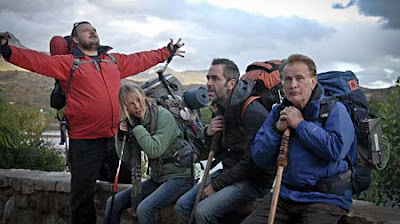 I just got home after seeing what I thought was a wonderful movie, The Way, written and directed by Emilio Estevez, Martin Sheen's son. According to Rotten Tomatoes, which is linked above, it has an 80% freshness rating. Those who didn't like it thought it was too sentimental and pedestrian. Well, they must not know much about spiritual quests, if you ask me! I've been on a few of these myself.

The movie is about a guy, Tom Avery, played by Martin Sheen, with flashbacks and hallucinations where he sees his son Daniel (played by Emilio Estevez) that shows the relationship the two of them had. Like most fathers and sons, it was complicated. Then Daniel is killed in France on the first day of a 900-mile-long pilgrimage, the Camino de Santiago. I had heard of this before, an ancient pilgrimage to the burial site of St. James in Santiago de Compostela in Spain. It is also known in English as The Way of St. James. This link tells you that it has been traveled by pilgrims for more than a thousand years and has several different starting points, but they all end up in the same place. It has now been named one of UNESCO's World Heritage Sites.

Anyway. The movie is about Tom going off to France, where Daniel had been caught in a storm and apparently froze to death, to collect his body to bring home. When he sees Daniels's backpack and provisions for the trip, he decides to have the body cremated and walk the pilgrimage himself, with Daniel's ashes. The movie is about the journey that takes Tom from his insular world as a Southern California ophthalmologist who was estranged from his son to a pilgrim attempting to find what his son was trying to teach him about life.

On the way, he runs into three characters who are as emotionally damaged as he is himself, and they become an unwilling group traveling the Camino together. One of my favorite reviews is from Steve Persall, the Tampa Bay movie critic. His full review is here, but I give you a favorite quote:


Like any road trip movie the path is scattered with colorful characters and, in this case, vibrant culture. Estevez stated in interviews that The Wizard of Oz influenced his style, with Tom as a grouchy Dorothy and three traveling companions discovering their hearts, brains and courage.

I really loved this movie, and I am grateful that my independent theater, the Pickford, gives me the chance to see movies that don't always make it into the big theaters. This one deserves to be seen by as many people I can talk into going to see it. Believe me, I'm working on it!
:-)
Posted by DJan at 3:56 PM