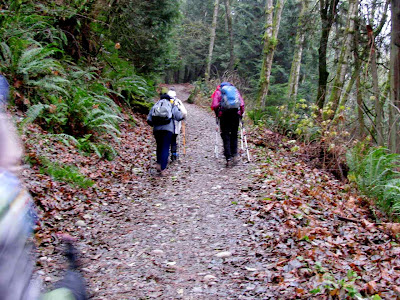 Eight Senior Trailblazers headed up to the Pine and Cedar Trail in our usual winter stomping grounds, the Chuckanut trail system. I have loved learning about these hikes, but now I am beginning to know their good and bad points. This one heads very steeply up an old logging road for the first mile or so. I tried to get a picture that gives an idea of HOW steep. This is the best I got. The sun wasn't shining because of the fog, but we knew that eventually it was supposed to be clear. 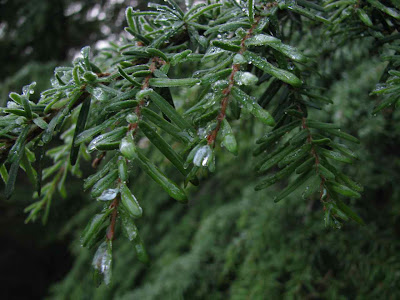 The humidity and cold temperatures made it difficult to stay warm when we weren't moving. Once in a while the sun would break through the fog, but then it would move back in. As long as we kept going uphill, we were quite warm. 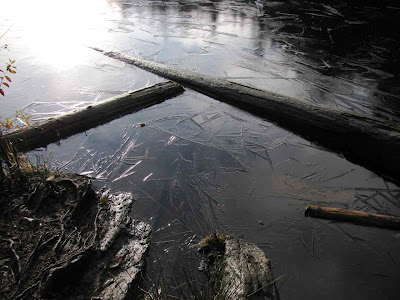 By the time we got to Cedar Lake, we saw that it is beginning to freeze over for the season. I thought this picture of the logs and the ice (and what seems to be possible sun breaks) was rather pretty. It was only 10:00am by the time we got here, so we took a loop around the lake and headed over to Pine Lake. Marjan was caught in the sunlight in this picture and a fortuitous ray of the sun centers perfectly over her head. You can see that the ice in the lake goes all the way across. 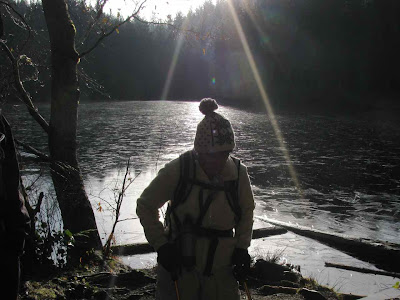 We kept seeing what we thought was a fungus growing on bare fallen branches. In the picture below, looks soft and fuzzy, doesn't it? But it's ice! It's called angel hair hoarfrost, I believe. When we tried to touch it, it melted. I took several pictures of it, but this is the clearest one I captured, and it could still be a little better. I was on the ground with my camera, using the macro feature, and by the time I finished taking several shots, I was getting cold. I just had to hope I got a decent picture. 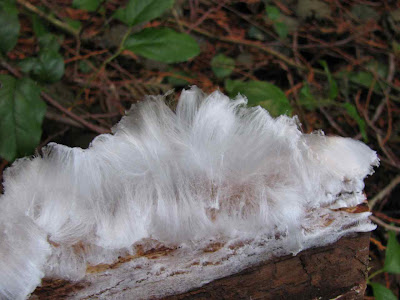 We decided to add an extra mile or so to the hike and headed over to Raptor Ridge. It was almost lunchtime by the time we got here, and lo and behold, the SUN came out and the last of the fog left the scene. I had a chance to catch four of the group enjoying the sunshine. 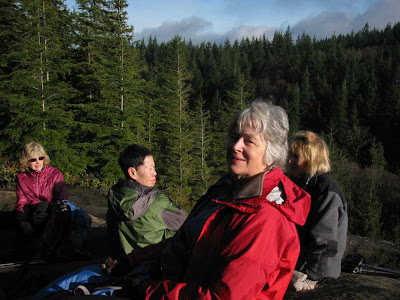 Behind them, you can see the fog finally blowing away. Although it was sunny, it never got warm, so our lunch wasn't all that leisurely. There are winter days here in the Pacific Northwest when we have both, but today wasn't one of them. The nice part is that it was DRY, and that's always a plus at this time of year. In fact, my new fancy raincoat is beginning to get a reputation for being magical: it's keeping the rain away. Wouldn't that be great? No, I'm sure it will be getting a chance to show its stuff. Just not today. Before the day was over, we had covered almost eight miles and 2,300 feet up and down. A good workout.
:-)
Posted by DJan at 2:42 PM