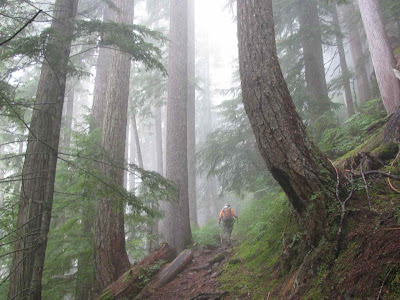 Today on our next-to-last extra Monday hike of the season, the Core Four (Al, Fred, Mike and me) set out to climb up Mt. Dickerman, one of the most popular hikes in the North Cascades, and because of its long distance from Bellingham, a new one for all of us. The event was open to every Trailblazer, but we were the only ones who made it. Two others had intended to come but weren't able to at the last minute. The hike started out in fog and mist, as it had rained very hard yesterday in the entire area. We knew that the clouds would begin to lift by noon, or that was the forecast, at least. We walked through several miles of old growth forest, seen above. 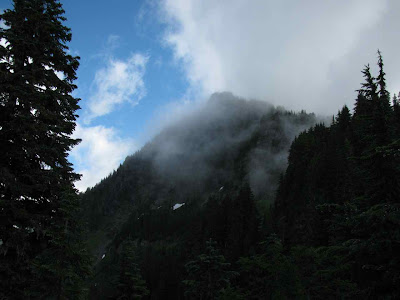 The hike ascended upwards via seventy switchbacks, which actually sounds hard but gave us a fairly moderate uphill climb through dense forest. This was our first view of the summit of Mt. Dickerman, seen here through the mist. We were about 1,000 feet below it. As we continued our climb to the summit, we passed through amazing fields of wildflowers and incredibly dense blueberry bushes, although none of them are anywhere near ripe. We also saw the incredible mountains we hoped would reveal themselves to us when we arrived at the summit, but they came and went, hiding behind the clouds, all day. 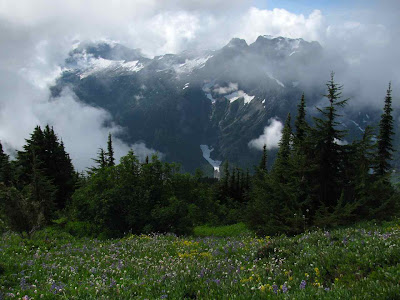 You can see the massive structure on the right known as Big Four, with hints of other mountains behind the clouds. There's nothing to be done about it, we are just going to have to return next year to get the full view of these wonderful mountains. I can't say we were at all unhappy with these dramatic scenes, though. 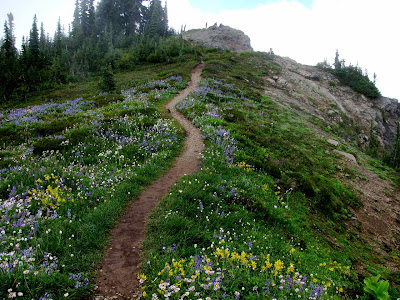 When we reached the summit (in the middle of the picture with lots of people standing on it), we decided to walk a short distance away to the next hill, hoping for a view of Glacier Peak, and others that were hidden behind the clouds. Instead, we were treated to another amazing view: seven mountain goats, all sunning themselves on the next hill! I used my telephoto to bring them closer, but if you enlarge the picture you will notice that at least two of them are smaller and probably babies. 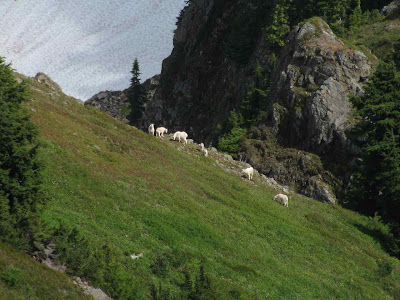 This is the first wildlife we have seen this season, and it was such really exciting for us. If we had stayed with the rest of the hikers on the summit, we would have missed them. I was just pulling out my lunch when Fred jumped up and pointed at them. Suddenly we were all snapping pictures right and left, and trying to stay quiet and calm so they wouldn't go running off. Aren't they beautiful? 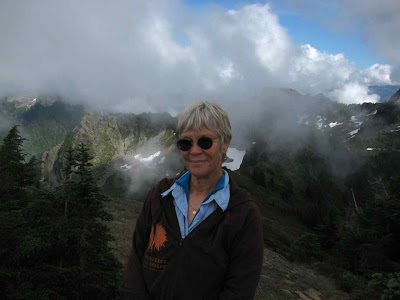 I asked Fred to take my picture, and you can see behind me that the clouds never cleared away completely, but they made for some wonderful and dramatic photographs. We stayed for almost an hour on the top before heading back down, hoping for more clearing. It didn't happen, so we descended on those seventy switchbacks in mostly full sunlight, tempered by the dense forest. 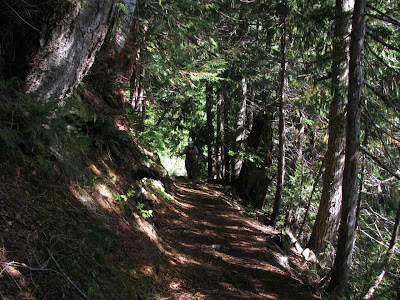 The fog and mist of the morning had gone away, and we were glad for the cool temperatures and filtered sunlight as we made our way back to the car. We had covered almost 4,000 feet of elevation gain and loss in just shy of nine miles. It's a beautiful place, and I can see why it's such a popular hike. I'll be back, not just to see the rest of the mountains, but because it was a magical and delightful place to be. What a day!
:-)
Posted by DJan at 8:43 PM