I was wrong about Skyline 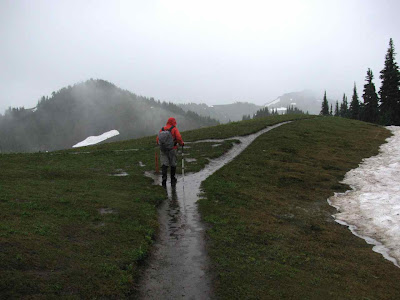 Uh-oh. I awoke this morning to the sound of rain drumming on the roof again. And it's Thursday, our Senior Trailblazers hiking day! I think many of our members heard the same thing and turned over and went back to sleep, because when I arrived, rain gear already on, only Al and Mike showed up. At the last minute, Marjan and Frank came to see if we might decide to go somewhere local and skip the drive before spending the day hiking in the rain. But I really wanted to go anyway, whereas Mike and Al were dubious. I said that the weather forecast said the rain would change to occasional showers and then it would be MUCH more fun than a local hike. I was wrong, as you can see from the summit shot of Al this morning. Marjan and Frank went home instead of joining us on Skyline Divide in the rain. 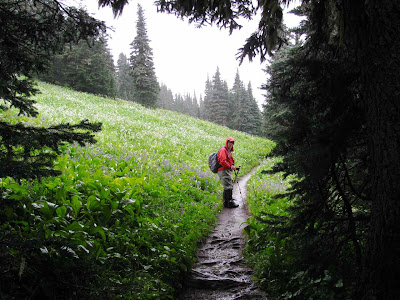 The flowers were as abundant as we have seen on our previous hikes this year, but we didn't get a chance to enjoy them all that much. The rain that I was SO SURE would let up was still going strong on the summit when we had the added enjoyment of high winds. Great: wind AND rain. 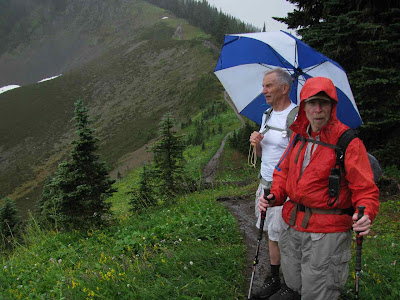 After conferring with my two other cohorts, we decided to get down out of the wind and have a quick lunch and then go exploring. Al had downloaded a couple of GPS coordinates to find an old abandoned mine in the neighborhood, so we headed down to the car and set out to find the old road that would take us to the Great Excelsior Mine. And guess what! We found it! 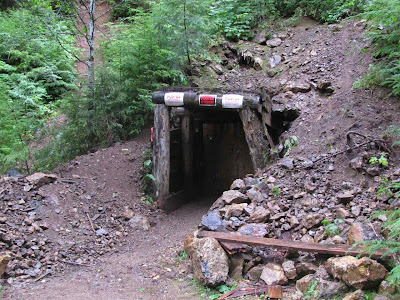 By this time the rain had pretty much stopped, and the day was much more exciting when we found this old abandoned gold mine after some bushwhacking for a mile off the road. We inspected it as much as we felt comfortable doing. As you can see, it's boarded up right inside those old uprights, and it's got warning signs to stay away and all that. We did go look through the holes to see if we could see anything, but instead we found that there is a strong breeze coming through those holes, and the air is at least 10 to 15 degrees colder than the outside air. 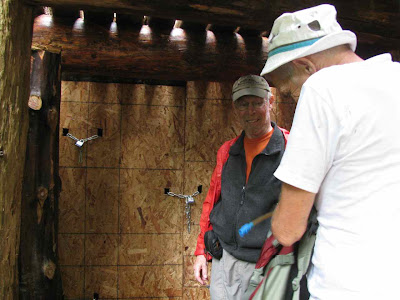 See the holes with the chains? Those are the ones that had the air coming through so strongly. Mike is looking inside his pack to see if he has a flashlight to see what we might see, but no luck. It was an exciting find, and it made the day well worth the drive up to Skyline Divide and a little bit of discovery to add to the day's enjoyment. On the way back down the road to the highway, we stopped to take a picture of Dead Horse Creek running into the Nooksack. It's the first major rain in a while, and I was amazed at how the white water of the creek ran into the coffee-colored Nooksack. 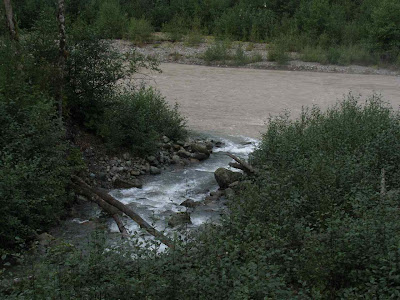 Our hike was a wet one, but I'm used to it by now. And I am so glad we went exploring and played in the liquid sunshine again today. That said, I am now ready for a little blue sky mixed with fluffy white clouds. The sun didn't shine anywhere near us today, but I am hopeful that tomorrow will bring a bit different weather. I had a great day, and I hope you did, too!
:-)
Posted by DJan at 5:19 PM